Whilst I swan off to meet SI Blantyre, Dave is brilliant and spent hours in a hot, ill lit, dusty store room, sorting through the medicines donated specifically to the Children’s Hospital. He definitely deserves a reward!

He books us into a safari lodge for the weekend near Liwonde so he can watch some wildlife, especially the birds. (What is it about men of a certain age and our feathered friends?!!!)

The map isn’t great and we turn north too soon, ending up on a dusty track, heading roughly in the right direction – thankfully he packed a compass. Dave is in his element driving our hired 4x 4.

Signposts are another low priority in Malawi, and Dave is forced to stop several times to ask for directions – I know, but it does show men can do this when necessary! The people are charming and everyone speaks a little English, and eventually we arrive at Liwonde. Lodge in the late afternoon.

He told me he had booked a ‘raised tent’, and it is literally just that! A large four man tent on a platform with a palm thatch for shade. The double bed is at least on legs so I don’t have to crawl along the floor. There is no electricity here, but there is plenty of hot water from solar power. 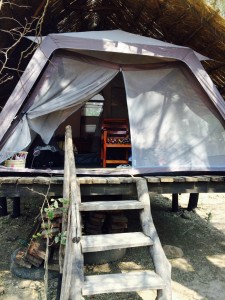 Yup it’s a tent on stilts!

Those of you that know me will appreciate how little I was impressed. As one of our daughter’s messages me ‘ I thought you guys gave up camping years ago’ – apparently not! I should have realised, we are paying $60 a night for the two of us, Mvuu Lodge, which is highly recommended, is about six times more expensive.
He also forgets to mention that the ensuite is 30 metres away, along unlit windy narrow paths complete with the odd pile of dried elephant dung. He says I only need to worry if its wet dung! 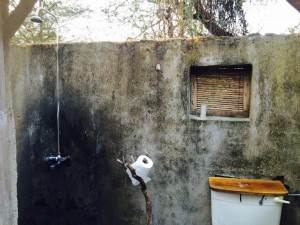 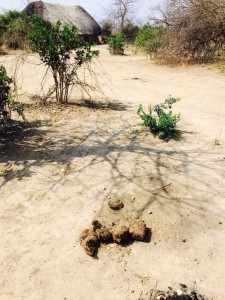 elephant poo on the path!

However at dusk, as we sit on the viewing platform we watch a large herd of elephants materialise out of the dying light, feeding less than 20metres away. The hot shower by the light of the moon helps together with some food and a cold beer. It’s all quite magical so I forgive him! 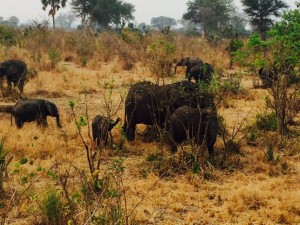