The Kenilworth and District Soroptimists’ met their target to raise £2000 for ‘Friends of Sick Children in Malawi in double quick time.(www.friendsofsickchildreninmalawi.org)

In summer 2013 the Soroptimists made a commitment to raise sufficient funds to support Charity Kanyanda, a nursing sister in the Queen Elizabeth Central Hospital in Blantyre, Malawi. The group set out to undertake a year of fund raising activities to raise sufficient monies to pay for Charity’s course fees in order that she could complete her first year of study for a Bachelor Degree in Nursing and Midwifery.

The target was £2000 and a number of charity events were planned and held to raise the money. Members held social fund raising events, including a beauty treatment coffee morning and an ‘apple day’ event. Also, all of the funds raised at the very popular and successful annual Soroptimist Christmas Fayre in November 2013 went to this cause and the target was reached by Christmas. 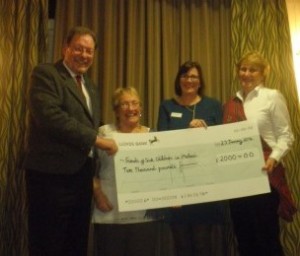 This is a tremendous achievement and the founder of the charity, Gordon Cowie and his wife Alexis attended a Burn’s night supper with the Soroptimists at the Holiday Inn Kenilworth where they were presented with  a cheque by President Georgie Larsen-Archer and the Malawi project lead Elaine Clarke.

‘We are thrilled to be able to support such a worthy charity and my thanks go to all members for their truly magnificent fund raising efforts which have achieved our target in just 6 months’  President Georgie Larsen-Archer told the audience.

Support for Charity is in line with the Soroptimist theme of  “educating, empowering and enabling women and girls around the world”  .

Charity Kanyanda works as a nursing sister in the Queen Elizabeth Central Hospital in Blantyre, Malawi and currently holds a professional certificate in nursing. Charity’s a widow with three school age children, has been working in the Paediatric Department of the hospital for the past 14 years.  Her work mostly deals with abused and vulnerable women and girls at the One Stop Centre, run by the Friends of Sick children in Malawi charity.

The funds raised will ensure that Charity can progress her studies so that she can acquire the best knowledge and skills to care for sick and vulnerable children. The degree course is run by Mzuzu University. Charity has previously travelled to the Birmingham Children’s Hospital for a short placement as part of her initial studies and with this financial support hopes to do so again. Doctors and nurses from Birmingham help to train medical staff at the Queen Elizabeth Central Hospital in Blantyre. 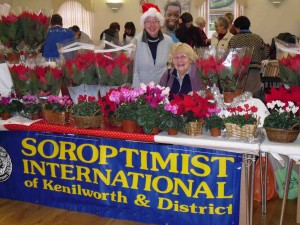 The Kenilworth Soroptimist’s Christmas Fayre was a super fundraiser for our Malawi project. The event raised money for ‘Friends of Sick Children in Malawi’ – which provides healthcare for some of the World’s poorest children