It started out as a numbers game.  First 4 then 8 and finally a nice round 12 of us set off from Coventry station on Saturday 8 August 2015.  The numbers were important because we wanted everyone to get a third off their rail travel and benefit from a 2 for 1 discount voucher at the entrance.  12 turned out to be the perfect number for our day out at the home of the codebreakers.

Bletchley Park had been on the bucket list for most of us for some time.  It had been widely reported as a great day out by friends who had already visited – and we weren’t disappointed.  The Bletchley Park ‘experience’ brought to life the secret world inhabited by over 8000 men and women, working flat out some 15 hours a day for the duration of World War 2 to decode messages using Enigma and the ingenious bombe machines.

A tour of the buildings on site led us to the famous Hut 6, where it seemed that Turing, Welchman et al had just popped out of the room for a minute, leaving cups of tea and packs of cigarettes on their desks and long streams of five letter coded print outs in their teleprinters.  The simulated sounds of voices and the clever use of visual imaging helped us to picture what it would have been like to work there …………… 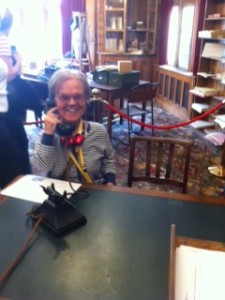 but we could barely imagine the deprivations experienced by staff during those long, dark days that gave everyone little or no time for breaks, in what must have been freezing conditions in the depths of winter and with the constant loud clacking of the bombe machines as their rotors turned and the coded data was processed.

By contrast, an unexpected highlight of the day was the pigeon hut where we learned about the ways that over 250,000 pigeons had played their part in the war effort, including one named William of Orange who was sent back from Arnhem (flying some 400 miles in 4 hours) to inform HQ that some of our troops had been captured there. Thanks to William, reinforcements were sent out to Holland and the luckiest of our men were rescued and able to return home.   On the day of our visit to Bletchley Park, the sun blazed down so it was tempting to stay outside in the grounds to enjoy it but there was so much to see in the short time available to us that we didn’t want to waste a minute.  Happily, as the ticket price allowed us to return anytime in the 12 months after our visit, there was every reason for us to take our time, absorb the atmosphere and at least try to understand the maths.  All were agreed, it was a great day out.