The Midland Chase Regional meeting was held in Lichfield and hosted by Lichfield & District Club on Saturday 7th December 2019.

A silent march through the city centre was organised as part of the 16 Days of Activism against Gender Based Violence.

Clubs in the Midland Chase Region wanted to raise awareness of the issue of domestic abuse. Many clubs have been doing work and carrying out projects in their own towns throughout the 16 Days of Activism against Gender Based Violence, but as the Regional Meeting was held during this period, we decided to do something as a larger group. Placards were made and carried through the city centre and around 50 members from the Region – all wearing orange –  took part. 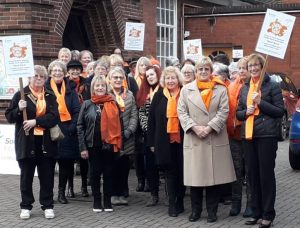 Permission was sought and gained from the appropriate authorities and In the week before the walk, Soroptimists took flyers with information about the event to local shopkeepers to ask them to display them in their windows. They spoke to them about Soroptimists and what we do at the same time.

Photos were put on our website and social media pages to promote the event further.

We significantly raised awareness of the issues surrounding gender based violence locally. We were seen by many shoppers and several comments were heard about what we were doing with several offering words of support. The flyers in shops along the route provided further information about the issue, both in advance and on the day itself.