Following a special White Ribbon Day themed Evensong at Newcastle Cathedral, attended by Newcastle Soroptimists yesterday, a vigil was held outside in a rainy Cathedral Square for the 112 women killed this year by domestic violence in England and

The Dean, the Venerable Geoff Miller made a personal commitment never to be guilty of domestic abuse himself nor ever to remain silent if he learnt of violence or abuse being inflicted by another man.

The cathedral tower was hung with a giant white ribbon and the tableau in the square depicted a different pair of women’s shoes for each woman who had died and a small lantern was placed beside the shoes of each to indicate they they were remembered and mourned.

Newcastle Soroptimist President Vera Baird spoke at the vigil. She described
how the physical sexual emotional financial and psychological abuse, which makes up domestic abuse, coming constantly from someone who had originally loved the victim and had been loved by her,
eroded self-esteem until she was unable to believe that anyone cared about her treatment or would listen to if she tri d to tell them about it. She invited the people present to join a local ‘domestic abuse champions’ scheme which had been started in workplaces Village Halls, Churches and voluntary organisations. Champions learn how to take a disclosure and how to ask kind questions and to help and signpost to the right experts of domestic abuse is happening to a colleague.

Newcastle Soroptimists then left to attend the lighting up orange of the Gateshead
Millennium Bridge that evening. {Please see the additional post ‘More White Ribbon events’ ) 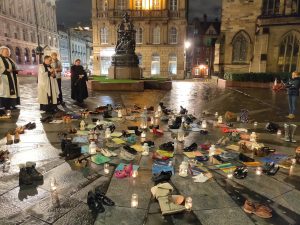