It has been another very busy and successful year of Programme Action across the Club year. We began the year by reformatting the meeting structure creating space to dedicate one meeting of the month specifically to Programme Action. This has placed Programme Action firmly at the centre of all we do. Within this format we have been able to create space for focus groups to develop ideas and more. As a result more members have taken a lead role in our projects and for newer members an opportunity to find out more about the projects by listening to the debate without necessarily committing to a project before un-derstanding what is involved. There has been lots of positive feedback from members liking this way of working together.
We have continued to work with partners for most of our projects building on last year and certainly a way of maximising our resources and benefits.
Programme Action projects need to tackle one of the five Programme Action areas and be-low is a flavour of the projects under the identified areas
• Economic Empowerment
• Education
• Environmental Sustainability
• Food Security and Healthcare
• Violence and Conflict Resolution

EDUCATION OF A GIRL IN NEPAL
Having completed our 5 year pledge to sponsor the education of a young girl ‘Kabita’ with S.I. Kathmandu we responded to their request to extend this support for another two years to enable her to complete her higher education. £200 was sent in the autumn to cover the cost for the first of these two additional years. Plans are in place for a table top fundraiser at Tynemouth Market in June co-ordinated by Cath Waller and Kay White. We continue to receive regular reports of Kabita’s progress and success.

CHRISTMAS BAGS FOR HOMELESS WOMEN IN NEWCASTLE
Christmas 2018 saw the Club supporting the Joseph Cowen Healthcare Centre to support homeless women for the 20th year. Members enjoyed mulled wine and mince pies whilst packing 25 Christmas bags with toiletries, chocolate, and items which make their life on the street a little easier 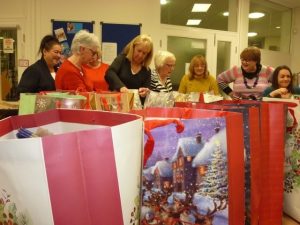 In addition, members continued to make regular donations to this local charity which offers homeless women access Primary Health Care, of clothing; toiletries and beverages which were delivered throughout the year

SPECIAL DOMESTIC VIOLENCE MAGISTRATES COURTS – OBSERVATION PROJECT AND REPORT
Between July and September 2017, 6 members from S.I. Newcastle Club were joined by members of other Clubs in the Northern Region to undertake an audit of the workings of the Northumbria Specialist Domestic Violence Courts, then located on two sites, at Bedlington and Gateshead. Trained by the CPS, the observers sat in on a total of 223 cases, undertaking more than 300 observations using a semi structured questionnaire to ensure consistency in the information gathered. In total, 76 (45%) cases were observed at the Northern SDVC in Bedlington, 94 (55%) were observed at the Southern SDVC in Gateshead.
The Police and Crime Commissioners Office (IPCC) analysed the information and produced an extensive report in August 2018 containing a number of recommendations to improve the experience of victims of domestic violence and reduce the ability of perpetrators to ‘game’ the justice system. This work has received national recognition with members presenting their work at the Chief Constable and IPCC Annual Conference in London and Vera Baird has presented the work following interest by a number of SI Regions.
The Observers have just produced a video providing Regions and/or Clubs interested in un-dertaking similar work with advice following their experiences. We plan to revisit this work later in the year to see whether the recommendations have been implemented.

NEW START BAGS AND MORE
We have continued to provide emergency bags, for the women victims of Modern Day Slav-ery and Sexual Exploitation through Human Trafficking, containing essential new cloth-ing, toiletries and day to day items. Northumbria Police distribute the bags as required and these bags have been instrumental in these women and girls developing a trusting rela-tionship with the Police.
Kath Shearer and Christine Lowthian visited the Hub from where the team of Police and So-cial Workers are based to discuss whether the contents of the bags still meet the girl’s re-quirements. As well as some minor changes to the bags we identified the need for some therapy equipment to support the wellbeing of those whilst needing support. These materi-als have been sourced and provided as has bedding and shoes.
Following a visit to the Club in 2017 Christinane Kitchakarn from SI Bangkok returned and gifted 4 New Start Bags at a Regional Coffee Morning 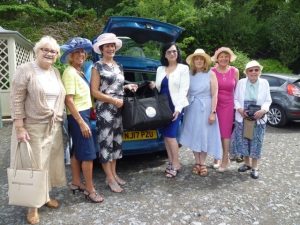 We also provided 10 gift bags containing toiletries, chocolates and a small present at Christmas for the women being supported at that time.
Earlier in the year following an approach by the Police we agreed that they could use these bags for women who were victims of Domestic Abuse and had had to be removed from their home to a place of safety. This work was recognised in an interview on Radio Newcastle during the 16 Days of Action with DCI Clare Wheatley. 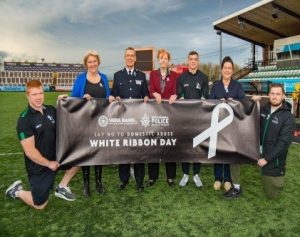 ter in the afternoon Soroptimist’s from Newcastle, Tynedale, and Tynemouth and Whitley Bay clubs gathered on the Gateshead Millennium Bridge. Also in attendance were the Northumbria Police Chief Constable Winton Keenan and IPCC Vera Baird, Gateshead Coun-cillors and members of the public. And on the pitch with Newcastle Falcons

TRAUMA TEDDIES
More than 200 knitted Teddies had been made by members and friends led by Catherine Waller and have been given to Northumbria Police who used them in situations where there is a distressed child or a communication link to a child is needed.
In addition 25 were produced and included in the Christmas bags for homeless women this year.

MERU WOMENS GARDEN PROJECT
Providing woman and girls in Kenya with an opportunity to become self-sufficient or earn an income through food production. Plans to run a fund raiser in the summer of 2018 for this project did not come to fruition but we were able to support this Federation project from our funds and donations of £400 which would then be matched funded by the UK Govern-ment thus the project benefitting by £800.

PERIOD POVERTY / DIGNITY
A girl not able to attend school and secure their education is appalling in 2019. We have worked with Newcastle West End Foodbank and the West End Refugee Service to distribute these products. Our resources were swelled when retailers and Chaplain Rev. Lyn Jamieson at the Metrocentre co-ordinated by Cris Young which resulted in 10 large boxes of products to go to the Gateshead Food Bank and another 10 boxes to Newcastle .

We continue to lobby Government to address this important issue

GOOD MENTAL HEALTH AND WELLBEING
A theme the Club wants to progress this year is that of good mental health and wellbeing both of ourselves and others. We have a programme of speakers but are looking to hold an awareness event in the Metro Centre on World Mental Health Day in October. Cris Young and Christine Lowthian are exploring this with the Charities lead at the Metre Centre

BLUE PLAQUE PARITY
Following the thought provoking talk by Baroness Joyce Quin, the issue of Blue Plaque parity has been discussed in the Club and Hilary Brewis is undertaking some background work as to how such plaques are dedicated in the City.
It certainly looks like we are heading towards another busy year. Here’s hoping for another another successful one.