THE HISTORY OF SOROPTIMIST INTERNATIONAL

S.I. Newcastle upon Tyne is the oldest club in the Region of Northern England. Our
Founder President, Miss Edith Base, held an inaugural meeting on 10th March 1937 in the Rendezvous Cafe in Newcastle. This Cafe is within the Fenwick department store and was a famous meeting and recruitment ground for ladies and their various organisations.
On 10th November 1937, the Club received its formal Charter from the National President Miss Elizabeth Hawes at a Dinner.

The Club grew rapidly until the outbreak of War when members became involved in
supporting the war effort and events overtook daily lives. Looking through the original Membership Book it is recorded that 14 members left due to pressure of work; 5 joined the Armed Forces; 5 had their employment transferred away from Tyneside; 2 were evacuated and one had to resign at the end of the war due to her category being a wartime post only. The loss of 27 members was a heavy toll as normal Club life was resumed.
In the beginning in 1937, our Club was a member of the North East Divisional Union which extended from Yorkshire northwards. Meetings were held in Leeds. S.I.Newcastle upon Tyne extended the message of working to support women and girls together with international friendship and became a ‘mother’ club to several new clubs in Northern England: S.I. Sunderland in 1938; S.I. Tynemouth in 1947; S.I .Morpeth & District in 1949; S.I. Gateshead in 1950 and more recently S.I. Tynedale in 1991.

In 2021, Soroptimist International will be celebrating the birth of Soroptimism in Oakland,California, U.S.A. The Federations, Regions and Clubs throughout the world will be active in marking this 100th birthday. Here, in Newcastle upon Tyne, members agreedthat it was time to set down our long club history into a new format and publish it digitally on our club web site.  (Please click on the link at the head of each section of presidents.)   It is with regret that we have lost many of the early club records and only have snippets and some early photographs to mark those years. The club thanks those members of the working party who have diligently pieced together the club, regional and federation events over our 82 years of history.

We hope that the inclusion of some notable world events will help jog the memories as to the historic settings in which our past members lived.

History of Soroptimist International of Newcastle upon Tyne

At the end of the 2018 – 2019 club year (President Dame Vera Baird QC )  the incoming President was Chris Jones.  As President Chris’s  club year from May 2019 progressed an unprecedented situation was thrust upon our members.  The COVID-19 pandemic began to affect all our daily lives and from 23 March 2020 the Government imposed regulations which aimed to slow the spread of the virus.  We could no longer attend club meetings and for the first time our Annual General Meeting was held electronically.   As this is posted on our web site, we all hope that the dangers to public health will diminish and we look forward to resuming our club activities.

This is the history of Soroptimism in Newcastle upon Tyne told through presidential years.  We realise that there are many members who might not have held the office of president but who have given much of their time and support to the club. In time, we hope we can capture their contribution through these pages.  In a similar vein, we are aware that in trying to capture eighty years of history, there might be omissions which people will tell us about so that we can rectify them. In that sense, this history is very much a living document that will be subject to updating.

Although above we have given a brief history of the club’s origin, we felt it only fitting to let our Founder President, Edith Base, tell the story in her own words.

HOW THE CLUB BEGAN

by Edith Base,  Charter President

This is an extract from a report ( sadly lost) entitled 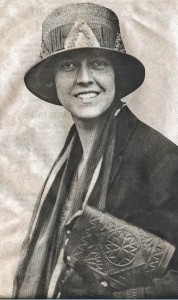 One Saturday afternoon in November 1936, a small party of Newcastle women met at Mrs.Hatfield Walker’s house in Osborne Road and heard preached the gospel of Soroptimism.  Their invitation to that meeting was a missionary enterprise on the part of Yorkshire Soroptimists.  Mrs E.E.Cockroft of Halifax, National President;  Miss E.A.Richardson of Bradford, President of of North Eastern Divisional Union;  and Miss I.Martin another Bradford member,  were the speakers at that preliminary meeting.

A fortnight later,  these Yorkshire women came North again,  addressing a larger meeting of Newcastle business and professional women in a room at the Y.W.C.A.,  and as a result the Soroptimist Club of Newcastle was formally inaugurated on 10 March 1937, at a meeting addressed by Mrs.Moore, President of the York Club, in the Rendezvous Cafe, Newcastle.   Mrs. Moore emphasised the fact that Soroptimism is international – a world-wide movement for fuller co-operation and friendship among women;  and the Newcastle Club has kept that wide vision.  We have grown up in times of rapidly contracting interests.  The coming war was a heavy shadow even as our first meeting was being held;  in our second year we struggled under the dead-hand weight of the 1938 ‘crisis’.   Then war broke,  and much that we had hoped and planned for had to be laid by while members directed their leisure and energy to national work,

But,  we have kept our vision.  As far as possible that vision has still been translated into action.  We have welcomed refugees from other countries to our club;  we have sent our contributions to the women of Ethiopia;  we have studied recent political history and international trends,  in the faith that when war is over our ideal of world sisterhood will be of value in the reconstruction of the world.    The National President,  Miss Elizabeth Hawes, presented us with our Charter at the Club’s first Annual Dinner on November 10th 1937 and in commemoration five trees were planted in the recreation grounds.

The Club began an active life with 20 members and unlimited enthusiasm,  and at the end of 12 months membership had grown to 75 and the Club was well established in the life of the town.   In our second year,  we had attained a position from which it was possible for our Club to organise,  enlisting the co-operation of 20 women’s organisations in the district,  a public demonstration in connection with international celebrations of ‘Status of Women Day’.  This year, also, we studied for ourselves the status of English women in the various businesses and professions, and we undertook, further, to institute a Careers Advisory Bureau for girls in the City, and this might have developed very usefully but for the war.

Our second President, Dr Dorothea Sinton, came into office just as war was realised to be imminent.  There was an inevitable restriction on club activities,  but if life needed to be quiet, it refused to be dull, and one of the Club’s most flourishing enterprises, the Study Circle, took form.  Our own member, Mrs.Jean Caldwell Brown, organised the course at King’s College for us on international relationships, and she herself was the lecturer until a war appointment took her away from the town.  For two seasons the Study Circle has continued with enthusiasm and devotion, and there is every reason to hope it will continue.

And so,  in spite of the war,  we have gone on.  Twenty years ago there was only one Soroptimist Club in the world.  Now there are hundreds of clubs and we trust that when peace is established the clubs in countries now under Nazi domination will be able to raise their heads again.  We have abundant evidence that their spirit is still undimmed .

Soroptimism embraces the biggest group of women’s clubs in the world.  That means its responsibility is very great.  As part of that world group,  the Newcastle Club also has wide horizons to engage its eyes.   The Soroptimist motto is “Looking Forward” and we have much to look forward to at this time.  Then in the near future lies….. PEACE.  Until it comes,  we mean to go ahead cheerfully in enjoying our social meetings and picnics and the friendly intercourse of the club  –  and earnestly, taking our part as citizens so far as we may.

When it comes,  we shall be needed.  We must be ready to help in building that secure edifice of international goodwill and service in which all overpass tyrannies can be forgiven and forgotten.  So,  each member walking with us, we “look forward” and go on.