The 16 Days of Activism against Gender based Violence takes place between 25 November and 10 December each year. The theme for 2020 is “Orange the World: Fund, Respond, Prevent, Collect!”

As the world retreated inside homes due to the lockdown measures introduced to curb the COVID-19 pandemic, reports showed an alarming increase in the already existing pandemic of violence against women.

“Accompanying the crisis has been a spike in domestic violence reporting, at exactly the time that services, including rule of law, health and shelters, are being diverted to address the pandemic,” stated the UN Secretary-General’s report, “Shared Responsibility, Global Solidarity: Responding to the socio-economic impacts of COVID-19“.

In the lead up to the 16 Days of Activism against Gender Based Violence, we are pleased to share the following videos :

“Specialist Domestic Violence Courts – how special are they?

A much-loved session of the annual SIGBI Conferences really does showcase the Best of the Best. There were six winners, each representing a different category and we won the Advocacy one. All winners gave a presentation of their winning Project, and received their Certificates from Programme Director Kay Richmond.
Advocacy
SI Newcastle-upon-Tyne for their survey “Specialist Domestic Violence Courts – how special are they?

How many women suffer unfair treatment in the Special Domestic Violence courts? We ask the question, ’How special are they?” How long can we continue to allow unfairness? Dame Vera Baird, along with the Soroptimist Clubs in Northern England instigated action to change this by observing procedures and behaviours in the law courts. This was undertaken by volunteer court observers, mainly from the North of England Soroptimists and trained by CPS and the Courts Service, observed 223 cases over a 5 month period. They found a significant number of gaps in the system but that if both funding and training were improved SDVCs would work as was originally intended
The findings included in 12 out of 21 not guilty pleas, defendants changed their plea to guilty on the trial date, as soon as the victim entered the court building. One judge commented about defendants ‘gaming the system.’
Specialist Domestic Violence Courts should do more to stop defendants ‘gaming the system’, improve the courts understanding of coercive control and provide Independent Domestic Abuse Advocates at every stage to help complainants and victims.
Action is being undertaken to transfer this knowledge and understanding of this issue in the endeavour to change the judicial system, educate, empower, enable women in our equality generation and work towards achieving Soroptimist Goals and the 2030 Agenda, “Leaving no one behind”. 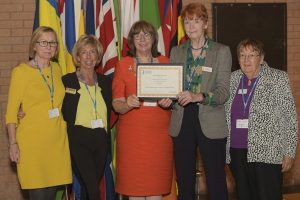 For more information please visit Soroptimist int Newcastle upon Tyne_YouTube where there are two videos about the role of the court observers and some findings from the observational study.

In the 2019 -2020 Programme Action report, we mentioned that club members were very impressed and inspired by two young Domestic Violence Champions who had attended one of our meetings.   We gave their organisation £1000 to provide them with ‘hoodies’ to promote their work. We are going to receive a further update at a future Zoom meeting, but meanwhile they have sent us photographs of their new hoodies which carry the Soroptimist logo. 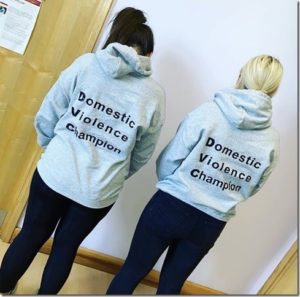 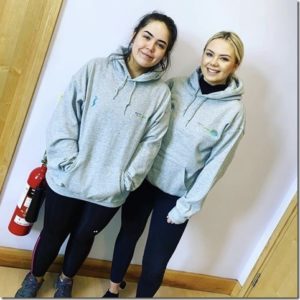 In ‘2020, we were fortunate to be shortlisted for the Northern Region’s ‘Reach for the Skies’ project for the work we had undertaken with the Domestic Violence Champions.  While we did not win, we were awarded a certificate.  Please see below.  Our Programme Action Officer, Christine, gave a presentation on the project and this also is included below to give more information about the Domestic Violence Champions. 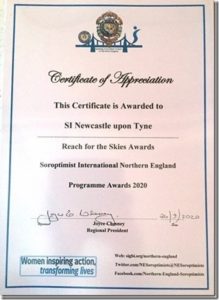 We were looking to sponsor a young girls” sports team and in providing their kit with our logo incorporated, we also hoped to raise awareness of Soroptimists.

We were struggling to find a way to communicate our offer and it was during one of our research calls that, the person at the end of the phone said, that she didn’t have such information but if we had some money then she had a project that we might like to support.

That project was the Domestic Violence Champions and they were looking for funding for some hoodies so we invited them to come and talk to us.

Two young women came to one of our meetings in January this year, and had us to mesmerised from the very start

They bravely told us their very personal stories. Both had experienced domestic violence in their family homes, and had been made homeless aged 15 and 16. But both had been lucky enough to be supported through their experiences by the West End Women and Girls Community Group.

They were certainly tough cookies. With the support of staff from the Community Group, they had taken on their own tenancies, continued their education, passed their exams and secured jobs.

The aim of their role is to challenge, educate and support their peers around domestic abuse and healthy relationships.

The only initial requirement to become a Champion is to be passionate about making change to break the cycle of abuse.

Throughout the training the girls receive, they develop lots of skills such as insight on domestic abuse, active listening skills, assertiveness skills, and an ability to put boundaries in place.

Alongside their nationally recognised training the Project also provides 1.1 emotional and practical support to victims and survivors of domestic abuse aged 11-25.

The Domestic Violence Champions are supported in their role through monthly networking meetings and regular supervision.

The idea of the hoodies come from the Champions themselves, as they wanted to be recognised within their settings and it was also a way of rewarding them for their hard work.

It was their decision to emblazon their role across the back of the hoodies because it challenges the cycle of domestic abuse and does not hide it.

At the beginning of the evening we thought that we were being asked for a couple of hoodies, but you should maybe be careful who you invite to talk to your Club! It soon became very clear that there were hundreds of volunteers working as Domestic Violence Champions and not just 2!

But so inspirational were these 2 young women that they cleared out our Programme Action fund that night, and we found ourselves sponsoring 100 hoodies sporting our logo for the next group of Domestic Violence Champions graduating.

So we met our objective to raise awareness of Soroptimists which, who knows, may lead to potential new members in the future. And we have developed another partnership in the fight against domestic violence.

Examples of Domestic Violence cases prosecuted in the North East in July 2020.