y March 26th, our speaker was Margaret Bozic, who gave an interesting and lively talk about Ruth Dodds. Her talk was based on Ruth’s diaries written in the 1920’s.

Ruth was born in 1890 in Gateshead, and was an author, playwright and councillor of Gateshead. She was one of three daughters of bookbinder and historian Edwin Dodds. She joined the Labour Party after the First World War and was elected to Gateshead Council in 1929. Ruth was passionate about the theatre. Together with her sisters, she was a member of the Progressive Players (formed by Gateshead Independent Labour Party Amateur Dramatic Club). She helped to finance the building of the Little Theatre in Gateshead in 1943. She wrote a number of plays which drew upon both her historical and political interests. This included the ‘The Pitman’s Pay’, about Thomas Hepburn, the miners’ union pioneer. 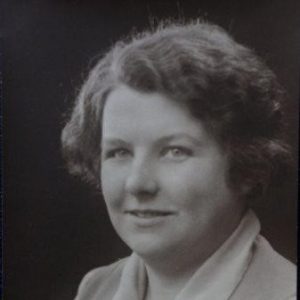 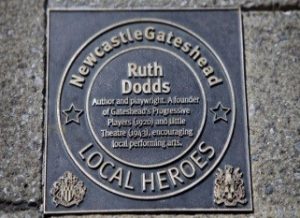 Ruth was Secretary of the Gateshead branch of the National Union of Women’s Suffrage Societies and became more politically active around 1915. She became more politically active around 1915. Her family had started a printing business during WW1. However, a disagreement with her brother about the General Strike in 1926, led to her leaving the business. She had previously joined the labour Party, and in 1925 took over as editor of their monthly newsletter, Gateshead Labour News (later renamed Gateshead Herald). From 1929, she was a labour Councillor but, in line with her Quaker principles, resigned from the labour Party in 1939 over its support for the Second World War.
Her contribution to her hometown was recognised in 1966 when she became the first woman to be made a Freeman of Gateshead. Ruth died in 1976.

An extract from Ruth’s diary which was written while she was working in Armstrong’s factory during WW1. 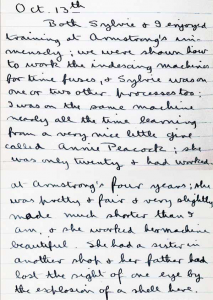