Our first fundraising event was a great success! The total raised was £1,160, which will give the Women’s Refuge travel fund a good start and will allow another two sewing machines to be purchased in the EdUKaid Kushona Project in Tanzania. Tickets sold out more than a week before the event and the room truly was packed. 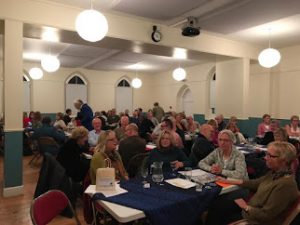 Questions for each round of the quiz as well as a fun game of chance at the meal break, were expertly introduced by Annie Riddle from Salisbury Journal. As well as teams from SI Southampton and SI Winchester there were teams of local friends and family as well as supporters from across the area who generously supported our event.

There was a bar as well as a raffle, with many excellent prizes. We are very grateful to all local businesses who kindly donated items in support of our event. 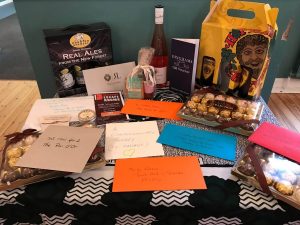 The winners of the quiz were the team ‘Five Game Birds and a Cock’ seen here celebrating their success. 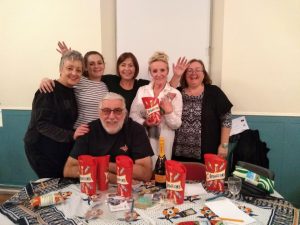 The evening was rounded off by Regional President Barbara Watts who was making her first official Soroptimist event appearance in that role. As well as thanking our guests for attending, she thanked the committee; Eleanor, Teresa, Barbara and Penny as well as the many other members (and partners!) who had helped on the night. 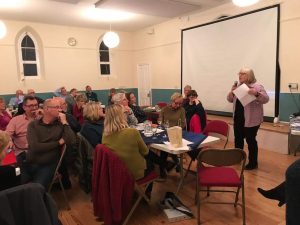 The funds raised at this quiz will be divided between two of our charities. We are helping Salisbury Women’s Refuge to set up a fund to cover the costs of residents’ travel to court hearings in other parts of the country. We are also supporting EdUKaid, a locally run charity working to improve access to education for children in Tanzania. We are specifically raising funds to supply two sewing machines to women which can be used to generate a new source of income for families, making it easier for them to cover the cost of education.

Thanks to everyone who helped to make our first fundraiser such a great success.