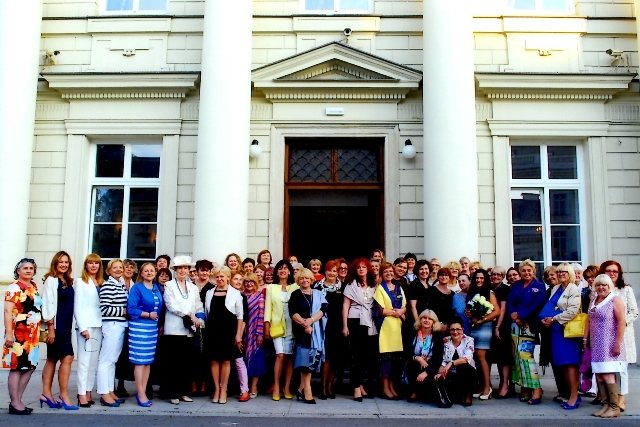 On Friday 18th, after a very early flight, our party was met at the airport by our 1st SI Warsaw hosts to begin a wonderful and varied weekend programme on the theme of ” A Weekend with Chopin”.

Later we headed for the amazing Chopin Museum to find out about the life and incredible achievements of Warsaw’s favourite son. After the museum, those with energy to spare were treated to a short guided walk through areas of Old Warsaw connected with Frederick Chopin’s life, led by SI Krakow member and Vice President of SI Europe 2015 – 17 , Anna Wszelaczyńska.  Anna’s knowledge and enthusiasm and her ability to communicate it in perfect English made this walk a real highlight.

On Saturday many of the other delegates (there were 66 attendees in total) including Soroptimists from Holland, Venice, Belgium, Liechtenstein and other Polish Clubs, went on a coach tour of Chopin’s Mazovia – visiting his birth place and other places outside Warsaw connected with the composer. The St Albans party preferred to stay in Warsaw and, in different groups, explored more of old Warsaw, some of its beautiful Palaces and the Museum of the Warsaw Uprising.

After a short break it was into our “glad rags” for the main event in the beautiful Primate’s Palace (see photograph above). The evening began with a welcome from the President of SI Warsaw, Jolanta Trześniewska and the lighting of 4 celebration candles, one lit by the Club’s founding President. We were then treated to a special concert – three Chopin pieces performed by a young Japanese pianist , Misato Tokuda, who is being supported through her Warsaw music studies by SI Warsaw’s friendship link  club – SI Hamamatsu.  After the concert came the Gala Dinner followed by speeches from Jolanta, President of SI Warsaw, ably translated in to English by Agnieska Parlinska and further speeches by ladies from the various visiting clubs, including our President, Denise Powell. Denise presented SI Warsaw with our presents – a book on English silver to celebrate their Silver anniversary and a packet of Forget Me Not seeds for each member of SI Warsaw as a reminder of our visit.

On Sunday, rejuvenated by sleep, we headed for the city once more, some taking in the Museum of Polish Jews, others the beautiful Łazienkowski Park and a public performance of Chopin beside the Chopin Memorial. There have been public performances of Chopin in this spot every summer for 56 years. At lunch time our group began to disperse, with the first group heading home. Other members partook of a lovely meal in a restaurant in the park run by the daughter in law of Magda, an SI Warsaw member, before heading to the airport. Four members stayed over into Monday to explore more of the fascinating city. Others were home dreaming of the exciting weekend and the enthralling programme they had just experienced and the new friendships they had made.

Six of our party stayed with members of the Warsaw club and were royally hosted – feasted, entertained and accompanied to the many activities during the weekend. The hospitality provided was second to none and we are all very grateful for the hard work of our sister Soroptimists, during what was already a busy weekend.

We hope we can do as well when we host members of SI Warsaw for our 60th Anniversary in 2017!

There is also a report of the weekend on the 1st SI Warsaw website in Polish with lots of wonderful photographs: www.soroptimist-klubwarszawa.pl/