To mark International Women’s Day Members were asked to bring and wear head gear making a statement about womanhood so we could learn and share something about women from all over the world. Please view the images on the Flipagram here:

As the old saying goes if you want to get ahead you’ve got to get a hat!

We celebrated with a candle lighting ceremony and shared food from around the world. The traditional Japanese doll pictured was a 50th Anniversary gift from our Friendship Link in Osaka in 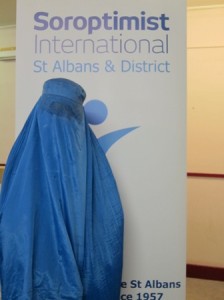 2007. The Burka was lent to us by Jackie Paling former Soroptimist Interntational Great Britain and Ireland Assistant Programme Director for Violence Against Women who visited Afghanist 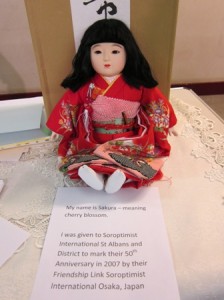 As you can see the evening was fun and inspirational!

Across the world thousands of Soroptimists mark International Women’s Day with hundreds of activities and events on and around 8 March. In some countries just gathering like this puts their lives at risk. Events highlight the economic, political and social achievements of women, and raise awareness of work still to be done to build a better world for women and girls.

The first International Women’s Day events were run in Austria, Denmark, Germany and Switzerland in 1911 and were attended by over one million people. More than 100 years on, International Women’s Day (IWD) has become a global mainstream phenomena celebrated across many countries and is an official holiday in approximately 25 countries including Afghanistan, Russia, Ukraine, Vietnam and Zambia. Thousands of events occur not just on this day but throughout March. Organisations, governments, charities and women’s groups around the world choose different themes each year that reflect global and local gender issues, for more information see the website: www.internationalwomensday.com and www.sigbi.org/2016/womens-day-2016/