What is happening about the refugee crisis in St Albans and Hertfordshire? was the question being answered at the Club’s meeting where Soroptimist Members and guests heard revealing 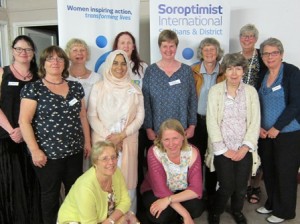 updates from Herts Welcomes Syrian Families (HWSF), STAR (St Albans Refugees). A presentation about the Badael report on women’s peace initiatives in Syria gave context to the humanitarian crisis and hope for the future in Syria with women as the key to peace and rebuilding.

In the photograph are Soroptimist Members of the SEW Team (Sustainability, Environment and Wellbeing) who hosted the evening, Liz Needham and Farhat Zia from STAR plus Catherine Henderson and Katie Seaton from HWSF.

Catherine Henderson from “Herts Welcomes Syrian Families” hwsf.weebly.com #refugeeswelcome explained the scheme, sponsored by the Government’s Depertment for International Development (DfID), to resettle Syrian families with vulnerable family Members who will have the right to remain in the UK for 5 years. HWSF started out as a campaigning group but now has the challenge of having a very different role as an action and facilitation group settling in families in the area into their own homes (i.e. not as guests in other people’s homes). A big issue is finding ESL courses (English as a second language) because the service was cut back severely following the financial crisis.

Liz Needham from St Albans for Refugees – “STAR” spoke about the great work STAR does in collecting goods (tents, sleeping bags, camping equipment, bedding, clothing etc) locally, sorting and sending consignments over to refugees in Calais, Syria and the Sudan. The group was only started last September and has been to Calais 6 times now! They are also working with the “Don’t hate – donate” campaign.

Katie Seaton presented a summary of the Badael report on women’s peace initiatives in Syria. “Badae 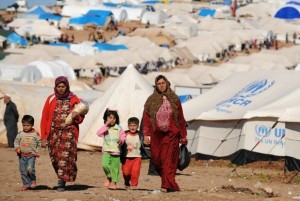 l means ‘alternative’ in Arabic. The Badael Foundation is a Syrian non-governmental organisation (NGO) committed to strengthening civil society groups and NGOs in Syria. The foundation works with groups that are active or want to become active in the promotion and/or implementation of activities to reduce violence, break its cycle, respond to the conflict and prepare for future equitable pluralistic Syria.” badael.org. Women and children are extra negatively impacted by the conflict – maternal and infant mortality has worsened dramatically, sexual violence is used as a weapon of war and bombing occurs in areas with high populations of women and children (because the men are away fighting or dead). Child soldiering is another big issue. There are less and less freedoms in Syria so it is very dangerous for women activists. There are 2 women’s groups of “White Helmets” in Syria. The women’s groups on the ground are the network of activists for change and it is vital that they receive support to continue.

At the end of the evening there were donations of money for both HWSF and STAR.

The Club will celebrate its Diamond Anniversary in April 2017, and this