The 100th Anniversary of Votes for Women in Poland was celebrated with a Soroptimist Conference in Warsaw entitled “Democracy is a Woman.” Barbara Saunders, SI St Albans and District Secretary, joined 88 sister Soroptimists from 12-14 October 2018 for the event.

This is Barbara’s “travel diary”, she certainly enjoyed her first Soroptimist Friendship Link visit and I hope you now enjoy reading this and sharing it with her!

“Warm weather, a warm welcome, and a huge amount of preparation by SI Warsaw, were all it took to make this weekend a success.  Coinciding with the 100th Anniversary of Poland’s Independence this month, there was much to celebrate.

Danuta Jabukowska, Treasurer, made my weekend by collecting me at the airport (with husband Derek) and ferrying me around between the various venues. Her smiling face, enthusiastic welcome and the way she ensured I was looked after at every stage, was fantastic, and I will be forever grateful that my return to Warsaw after 45 years was so memorable and enjoyable.  So much had changed in this vibrant city, with its world class museums, wide boulevards and historic squares. Danuta and Barbara are pictured here at Barbara’s Hotel.

The weekend began with an important visit to the Parliament, (Sejm) for the SI members from all over Poland (see the next 3 pics). An ex-Soroptimist who left the organisation when she became active in politics facilitated the visit and spoke about the structure of the lower House and Senate while we sat on the balcony overlooking the chamber. As in the UK women are in a significant minority in the Parliament and tend not to get the more senior roles. The Government has a significant overall majority and so there is little opp

ortunity for opposition views or those of women to be heard. Soroptimists recognise that there is still much to do to get their voice heard, and they were able to debate the issues with a female MP during our visit.

After the Parliament visit a small group of us had a guided walk along the Royal Mile to the old town, now beautifully reconstructed before an informal dinner in the Ujazdowski Castle.

With a personal interpreter for me as the only English participant, the Conference started with a history of how all Polish women achieved the vote in 1918 by Anna Rosner from Warsaw University.  The Association of Polish Women opened an office. A Convention in 1917 in which more than 1000 participated had talked about the importance of women as citizens, feminists created the mood for change, and Poland gaining its independence after WWI was the final trigger. Rights to education were sought as women could not enter University as students or teachers and they also wanted the right to enter Parliament.

Soroptimists today consider that there is still a lot to do to gain equality, especially in pay and opportunities for advancement in the workplace. Members heard from a spokeswoman from the European Ombudsman’s Office European about the Gender Equality Index produced by the European Commission in 2017.  This looked at roles in the home, at work, in care and social settings, and in corporate organisations including media and health, among others.  Despite methodological issues, this showed that progress was happening at a snail’s pace. While financial equality is improving significantly, women’s pensions in Poland are 40% less than men’s, and Poland is below the average of other countries in most categories in the index. A speaker from the Warsaw School of Economics looked in detail at the employment market and equal pay and observed that the number of women in management has increased significantly (as it has across the EU), but women still make up only 40% of the workforce and earn 18.5% less, a situation that has hardly changed over the past 10 years.

Alicja Mikolajczyk-Kontek, President of SI Warsaw I Club is pictured here addressing the Conference and launching a campaign to educate young people about elections and encourage them to vote. This will be multi-media, e.g mobile phones, Facebook and Instagram and include posters on buses. Advice will be given to Clubs on how to be involved.

One of the most inspiring sessions of the Conference to me as a visitor was the Panel Session “Why are we Soroptimists”. There was no doubt from Members of all ages – ‘We want to change the world!”  They value the friendship, the link with sisters across the world, being part of an international organisation with a voice at the United Nations and the power that comes from working together. ‘Democracy is a Woman’ and the members of the Soroptimist Union of Poland are taking it forward.”

This final group photo is of the Warsaw Soroptimists outside the Hotel Bellotti ahead of the Conference. 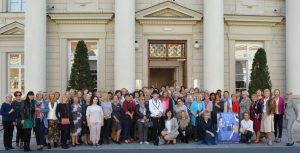