On Monday 26 Jul our speaker guests were Raihaanah Ahmed, who set up the Sopwell Community Trust which run community initiatives such as Eid in the Park with the aim of breaking down barriers between different communities living in St Albans, and Shelley Hayles. Shelley is a leading voice in Black Lives Matter in St Albans, a registered Social Worker, lobbying for change to the Children Act to provide more provision for Care Leavers.
These two inspiring local women infomed us about their local community support and “accidental activism”. 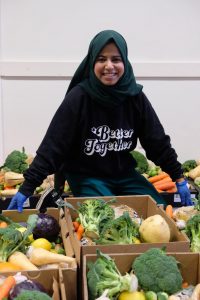 Raihaanah Ahmed
Raihaanah introduced herself and told us a little of her background. She is a Muslim and Bangladeshi woman. She formed the Sopwell Community Trust. One initiative is Eid in the Park with the aim to make the event accessible to all members of the local community. Raihaanah organised a number of community events pre-Covid. She wants to break down the barriers between communities.  She’s not ordinarily someone that seeks out the limelight but forced herself to be more prominent and hopefully be a role model and show what members of the BAME community can achieve. Raihaanah describes herself as an “accidental activist”.

Pre-Covid she was working with educators to improve involvement and outcomes from children from the BAME community. They have also been using translators and medical professionals into communities to get a better idea of these people’s health needs are.

The groups Raihaanah leads have organised events for young people to show them what opportunities were available for them after school. These events always include an element of food to each activity so that people experiencing food poverty could access a hot meal.

Eid in the Park – free entrance is offered to members of the refugee community and those on low incomes who are known to struggle with food poverty. That way they were able to access a meal.

Once Covid began the Sopwell CommunityTrust realised that most of the normal means of reaching people were now closed, eg schools, faith organisations. They invested in producing and delivering leaflets to pharmacists and GP surgeries. Started delivering food boxes to families in-need pre-Covid – supporting 47 families and how they are supporting 400 families. They now have a team of 54 volunteers. Get food donations from supermarkets, this food would otherwise go to landfill but is still safe to eat.

Another issue that emerged was mental health issues. They started doing check-ins with those identified as at risk and intervened in last year with 5 suicide cases.
They obtained funding for Covid catchup sessions for children to support them with their learning. They have also been putting on computer literacy training for adults to get people some basic computer skills. 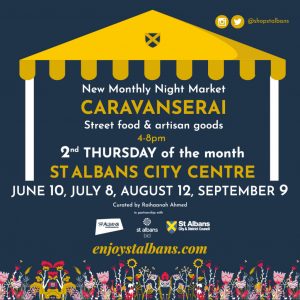 Raihaanah told us about the Caravanserai Street Market in St Albans 2nd Thursday of the month 4pm to 8pm The number of stalls has grown with traditional produce being sold by members of the Sopwell Community Trust. This is to provide people a way of moving on from receiving support and being able to generate income for themselves so they can support themselves. At present one to two families per week have been able to do this. Raihaanah felt it was important to get across that people are extremely reluctant to access support and they don’t want to access support any longer than they need. 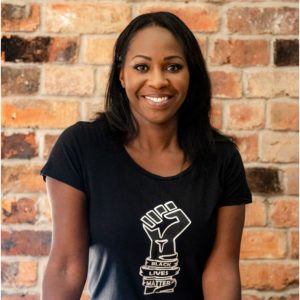 Shelley Hayles
Shelley is a registered Social Worker and Child Minder. Became a prominent in the local community due to her involvement in St Albans Black Lives Matter protests. She started of Community Interest Company, Leeanna’s Wish in her late sister’s name. The charity is dedicated to improving access to education, training and learning support for 12-17 year olds from disadvantaged backgrounds, creating safe spaces and environments where individuals can learn, play, create and develop their life skills in order to access future opportunities in education and work and have successful lives.

Shelley worked with St Albans Museum to hold a successful Black Futures event celebrating the contributions of the Windrush generation. Through working with people who are living in poverty she sees a lot of pride and people who don’t want to access benefits. They may be working several jobs and still unable to lift themselves out of poverty. Shelley feels very aware of the divide between people living in poverty and the affluent. She sees people who are working full time as professionals and working weekend cleaning jobs in order to pay rent. She is also a volunteer for the St Albans Liberal Democrats as the diversity officer. She gets frustrated that members of the BAME get lumped together when different communities have very different needs.

It was wonderful to hear from Raihaanah and Shelley – they are inspirational women, motivational role models for young people finding their way in the complex and inequitable St Albans society and community.

Both speakers shared the frustration of constantly chasing funding. A lot of the time they are pitted against other charities and groups working with the same hard to reach groups and when one is successful with a bid another misses out.

Raihaanah and Shelley will be given donations for their respective charities, Sopwell Community Trust and Leeanna’s Wish.