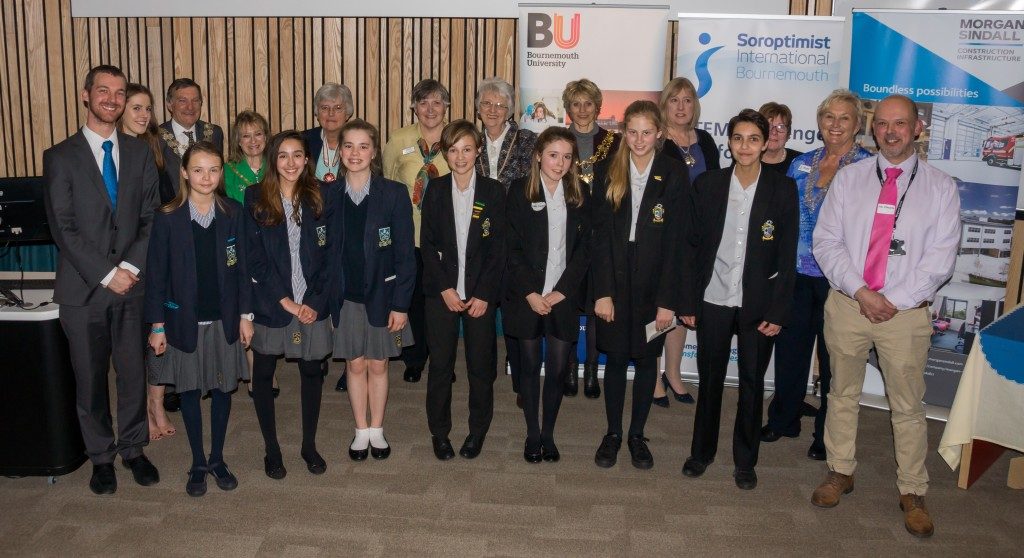 Winners with teachers and VIP guests

Soroptimist International Bournemouth has held their Science, Technology, Engineering and Maths (STEM) Challenge for the fifth year attracting more interest from the engineering world than previously. The challenge is for girls only to promote participation and raise aspirations in industries that young women often see as masculine and not for them.

Teams of girls from nine schools took part in the challenge with the objective of creating a solution to a problem which will help people in the poorest parts of the world. The girls rose to the Challenge and had some brilliant ideas, well executed projects and interesting models. Prizes of £250 to each winning school and £50 to each team member were presented by Cllr Xena Dion, Mayor of Poole, to the Year 8 winners from St Peters School whose project “3B’s” was an ingenious water filter strapped to a shoe for people in Malawi where access to clean water is difficult. Cllr Eddie & Mrs. Janet Coope, Mayor & Mayoress of Bournemouth presented prizes to the Year 9 winners from Ringwood School whose project “S. A. Stem” produced a reusable, easy and compact stove to provide warm water and cooking facilities for people throughout the third world. All girls who completed the Challenge received a certificate of participation from the Soroptimists and achieved the British Science Bronze CREST award which recognizes achievement in STEM based subjects and were sponsored by local companies Aish Technologies Ltd and Morgan Sindall Construction South.

The judging and awards ceremony was hosted by Bournemouth University in the new Fusion building, who also provided refreshments for the girls and their supporters. Students from the University acted as STEM ambassadors and gave the girls a guided tour of the University.

Words of encouragement were given to the girls by various speakers: Deputy Lord Lieutenant of Dorset, Professor Gillian Slater, thanked the judges and emphasized how her career was influenced by an inspirational teacher, this was a common theme from all speakers. Dr Margaret Emsley, Civil & Constructional Engineer and currently Immediate Past President of Soroptimist International Great Britain & Ireland, listed successful women engineers from the past and added that “two million engineers are needed in the UK in the next five years”. Student of architectural technologies, Lauren Milnthorpe, shared her journey through education advising the girls “never to let anyone say you can’t do something just because you’re a girl”. Ann Garvie, Immediate Past President of Soroptimist International and also working in the construction industry, thanked the sponsors and her advice to the girls was to “aim high, be passionate, do not worry, crack the glass ceiling, bring gender equality – because no other country has done this yet!”

Messages of encouragement were also received from Dr Helen Sharman OBE, the first British astronaut and the first woman to visit the Mir space station in 1991, her message was to “Aim High” and Roma Agrawal, Structural Engineer on the Shard stressed that STEM “subjects are all about people – we use technical principles to make life better all around the world”.

Bournemouth Soroptimists hope that more girls will consider studying STEM subjects at GCSE, and ‘A’ level and go on to take a STEM based apprenticeship or study at University for a STEM based career because of the fun and interest raised by this Challenge.