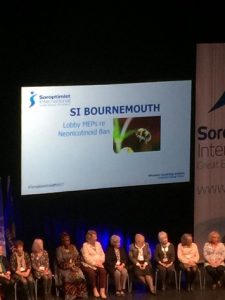 The ‘Lobbying’ programme action group at SI Bournemouth were praised for their work on lobbying MEP’s about the inappropriate use of neonicotinoids (bee killing pesticides) at the annual SIGBI Conference in Cardiff.  The project was celebrated as some of the best practice work by soroptimists in the Advocacy category.  SI Bournemouth congratulate the catergory winners SI Lurgan for their survey work on human trafficking which has now been used nationwide and will be used to form future government policy.