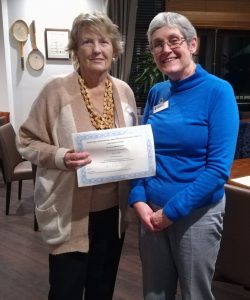 Jenny emphasized that her commitment was determined by the amazing good works in the various programmes of action over the decades not only locally but regionally, nationally and internationally and are too many to mention individually over such a long period of dedication.

Members annually reflect on their work and 2018 was a real milestone when the SI Bournemouth club celebrated its 80th anniversary and was awarded the Queen’s Award for Voluntary Service for work on their STEM Challenge project.

2019 is expected to be another exciting year for members who, along with their ongoing programme, will be supporting the Soroptimist International of Great Britain & Ireland (SIGBI) conference which is being held at Bournemouth International Conference centre from 24th– 26th October.  The emphasis this year is on mental health and SIGBI President, Sue Williams, strapline is ‘Think On It’.