And …………..Our Inspirational Member!

One of our former members may be the only Soroptimist to be celebrated inside a British passport! 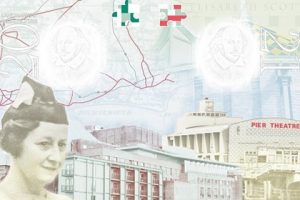 Our club is immensely proud to be able to claim Elisabeth Scott, the architect, as a former member. She was born in our town and had to convince her father to send her to a good secondary school because she wanted to train to be an architect. Until then, girls in her family had only been educated at home. So at at 14 she went to board at Redmoor School in Canford Cliffs (1913-1917) where she passed her Higher Certificates with excellent marks.

The Architectural Association had only just started to accept women onto their courses, and Elisabeth was very much in the minority when she was offered a place. She graduated in 1924 and began her long and successful career.

In 1928 she became a public figure when her design for a new Shakespeare Memorial Theatre at Stratford on Avon won an international competition. Still not able to vote because of her age and sex, she was legally entitled to form a business partnership. So she started her own practice and continued running this until the Second World War.

Whilst living in London she had become a member of The National Society for Women’s Service, a forerunner of the Fawcett Society. Here, she was part of a circle of women who were trying to work towards and support women’s entry into the professions. Some of her designs from that period reflected those ambitions, for example the Fawcett Building at Newnham College, Cambridge and the Marie Curie Hospital in Swiss Cottage, London.

The war and its impact on her practice, caused Elisabeth to return to Bournemouth early in the 1940s. At first she undertook work for local architects. In particular, Ronald A. Phillips and Jackson, Green, Down & Partners. As the immediate post war restraints were lifted, Bournemouth Borough Council employed her to design theatres on Bournemouth and Boscombe Piers. She continued working for them for about ten years, only retiring in 1968 at the age of 70.

Past members of our club remembered that Elisabeth had a hand in the designs of South Kinson Infants School in Moore Avenue, which was opened in 1951 and a property near Cemetery Junction, Bournemouth. As an employee of the Council she was probably the designer of Boscombe Pier Entrance Building, which has been listed by English Heritage, although her departmental head, John Burton is credited as the architect. She may well have been responsible for other Municipal buildings erected in that period.

We have a record in our club minutes that Elisabeth was asked to draw up plans to adapt a property which the Club bought for charitable reasons in 1951.

More recently we were delighted when we discovered that Elisabeth’s image was to be used inside the 2015-2020 issue of British Passports as part of a series celebrating the UK’s creative and cultural contributions to the world.

We very much hope that Elisabeth’s efforts towards women’s progress and the Bournemouth landscape will be recognised one day in the town of her birth.