2016 is the seventy-ninth anniversary of the Soroptimist International Great Britain and Ireland, Newcastle upon Tyne branch’s initiation. This year, our Charter Lunch was held at the Centre for Life, Times Square, Newcastle upon Tyne on Saturday October 29th and began at twelve noon.

The club members had decided that the memory of a former club member, Olive Kaer, would be celebrated in the collection taken up for the Great North Air Ambulance Service. Olive Kaer was a long standing and committed member of Soroptimist International Great Britain and Ireland, Newcastle upon Tyne branch and was Club President in 1992 – 93. Olive was awarded an M.B.E. in 1992 for political and public service and was a leading City Councillor for many years in the Arthur’s Hill Wingrove ward. Olive served as a Governor at Dame Allen’s School and had a very active interest in ‘Save the Children’ fund where she was an Honorary Vice President until her death on 27 July 2016 at the age of 92 years. Her late daughter Lisa was also a Soroptimist and Club President in 1995 – 96 and is survived by her son John who asked that half of the funeral donations made in her memory be given to a charity of the Soroptimist’s choosing: The Great North Air Ambulance Service. Olive was a vibrant and engaging member of our Club and of the regular retired members and friends Coffee Mornings. She is very much missed by all her sister Soroptimists and friends.

The speaker at this event was James Atkinson, who is part of the Great North Air Ambulance Service’s ground crew. He has been volunteering for two years. He will soon begin training as a paramedic He spoke about the fantastic work of this organisation and why it is so important to contribute to its continuation. 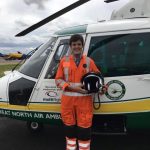 In fact, it costs four and a half million pounds to fund the three helicopters and the organisation relies entirely on public contributions.

Nine paramedics are employed full time. Nineteen doctors work alongside them and there are four main pilots. A new initiative is the ‘Blood on Board Scheme’, which means that patients can be treated more effectively in situ and save valuable time.

Sarah Zissler, head of fundraising at GNAAS, said: “We’re delighted to be attending the conference to share with guests who we are and what we do. It is a fantastic opportunity to show how lives are being saved around the region and to hopefully inspire others to support our work. Thank you for inviting us.” 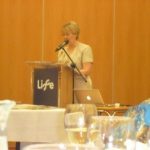 Following a delicious lunch and James’ presentation, a response was made by Jane Inman (President Elect of SI Northern England 2015-16).  She spoke about the club’s start in 1937, the club’s work with the Joseph Cowan Centre, the North of England Region Gift Box Project. She concluded by quoting our club’s founder Edith Base writing in 1942: ‘In the near future lies peace. Go ahead cheerfully’. She congratulated our club on its achievements in helping to transform the lives of girls and women. 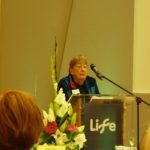 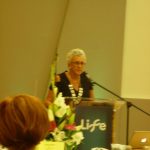 The Response from Our Guests was given by Suzanne Brown (President of SI Northern England). Joint President Christine Lowthian made the closing remarks at the end of a very enjoyable and thought provoking afternoon.