Preparations all complete and the room is looking fabulous. Christine Lowthian’s fantastic creative touches in evidence once again. 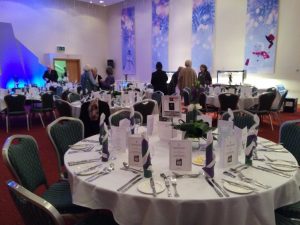 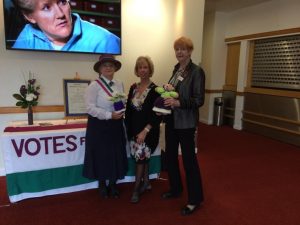 Entertainment was provided by The Standing Sisters, who sang rousing songs of the Suffragette movement, accompanied by a silent film of Suffragettes in action. Led by renowned choir leader/singer Bethany Elen Coyle, Standing Sisters are a group of women who sing about women’s lives, history and stories. They were joined by some WASPI women and performance included the (shortly to be launched) WASPI Anthem. 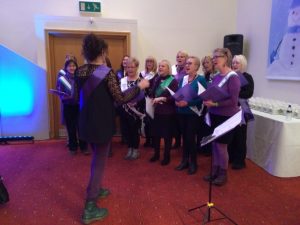 President Vera welcomed everyone and after introducing her top table, invited them to introduce themselves and to state whether they were a Suffragette or a Suffragist. The difference being the level of violent action they were prepared to take part in to achieve their aims. 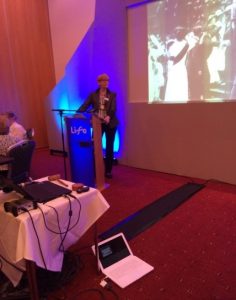 After a delicious lunch, and the’ Loyal Toast’ proposed by President Vera, a ballot was taken of who was considered to be the most effective Suffragette. However, not everyone could vote! On the back of each menu card, was a description of the person each guest was for the purposes of voting. Only people over the age of 30 who owned property with a certain rateable value were eligible. So, only 11 people could vote out of 87 guests. 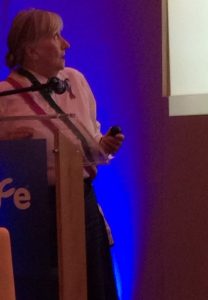 Pat Stevens gave us a most interesting talk on the Battle for Newcastle.

The so-called Battle of Newcastle took place in October, 1909, as the suffragette campaign for votes for women hotted up. The 1909 event happened when the Chancellor, David Lloyd George, visited Newcastle to deliver a speech at a venue in the Haymarket. Suffragettes gathered to
lobby him over votes, and also to protest at the force-feeding of women on hunger strike in prison. The Journal and Chronicle reported incidents such as suffragette Lady Constance Lytton throwing a stone at Lloyd George’s car. Attached to the stone was the message: “To Lloyd-George, Rebellion Against Tyranny is Obedience to God. Deeds, not Words”. Eleven suffragettes were arrested and taken to Newcastle Prison, where they went on hunger strike. Four were released after a doctor decided they were unfit to take force feeding. The others were force-fed. After her talk, Pat proposed the ‘Toast to Soroptimist International’. 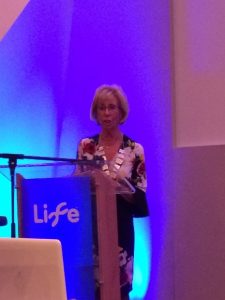 ‘The Response’ was offered by Regional President Shirley. She spoke of the work of SI Newcastle. She also told us about her charity for this year which is Streetwise. Streetwise is a project for young people in the centre of Newcastle that provides free advice, counselling and sexual health services to 13-25 year olds.

The ‘Toast to the Guests’ was proposed by Communications Officer SI Newcastle, Lis Graham. 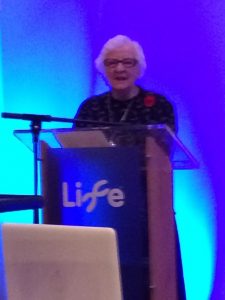 The result of the Ballot was announced by Past
President SI Newcastle, Christine Lowthian. Emily
Wilding Davison was narrowly declared the winner. 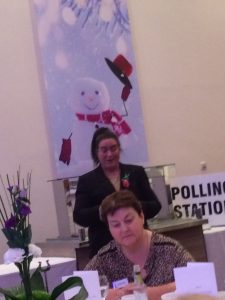 President Vera thanked everyone for coming and the event was deemed to be a great success.