Today, current and former Soroptimists from around the Northern Region attended the funeral of Miss Florence Mary Kirkby (22nd June 1921 – 15th January 2019). The church was crowded with friends, colleagues, and former pupils and it was a wonderful tribute to Florence’s life and her wide range of interests that so many people came to show their affection and respect for her. When notice of her passing was posted on the Newcastle upon Tyne Soroptimist website and Facebook, we received a response from a lady who knew Florence and who remembered her as an inspirational lady. She commented: ‘I knew her through British Federation Bfwg and did not realise Florence was a Soroptimist too. I have attended her 90th birthday party and it was just so lovely to see a twinkle in Florence’s eyes and million dollar smile, throughout the celebrations. 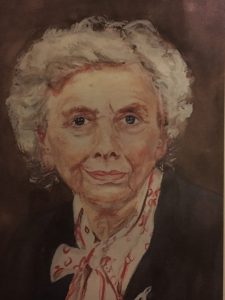 Florence was born in Manchester but in her childhood her family moved to Blackpool to improve, hopefully,  the poor health of her father. She later travelled daily into Manchester University where she graduated with a BA in 1948 and earned her teaching Diploma the following year. In 1984 she completed her Master’s degree while also serving as National President of the Secondary Heads Association. She continued as a superannuation consultant to the Association until 2000. She served as a member of the Burnham committee on teacher’s salaries from 1974 to 1984 and the government committee on the School Curriculum from 1984 to 1987. She became a member of the Court of Newcastle University in 1972 and was awarded an Honorary Fellowship of the University in 2005. In 2013 Miss Kirkby was honoured with an M.B.E. for services to education.

Miss Kirkby was the head mistress of Rutherford Comprehensive, formerly the Rutherford Girls High School, one of our City’s best loved academic institutions. Forty years ago there were few opportunities for a woman to develop a high ranking career. To become headmistress of a girls school was one of them but most people will have assumed in 1967, when the girl’s school and the boy’s grammar school merged and became a comprehensive that headship would go to the male contender. No doubt eyebrows were raised when Florence was appointed and some of the boys may have anticipated a softer regime. They were to be disappointed, the words from a former pupil at that time were “Miss Kirkby? A little lady who ruled with a rod of iron”.

She earned broad respect for her obvious intelligence, commitment and excellent choice of appointees. She didn’t try to be one of the gang but was held in great affection, illustrated by the large turnout in 2007 to celebrate the 40th anniversary of her arrival in Newcastle.

By example and through her extracurricular activities, Florence Kirkby has invested efforts over half a century in the professional development of women in society. She was Club President of Soroptimist International Newcastle upon Tyne in 1983-84 having joined the organisation in 1972 and then later Regional President of Northern England Soroptimists in 2010-2011. She was also a member of the British Federation of Women Graduates where she was President from 1997 to 2000. But her focus was not by any means confined to the realm of education and professional women. Florence had a deep commitment to broaden issues in society, mainly the care of the less privileged. She was Chair of the Northumberland branch of Carers UK and a member of the board of directors of Shared Interest, a cooperative lending society which aims to reduce poverty in under developed countries. She spent 8 years on the Northumberland Community Health Council, chairing it from 1994 to 1998 and Treasurer of North of Tyne Patient’s Voice, a company and registered charity which coordinates the various regional health forums in the North East as well as promoting the interests of patients.

In her spare time, Florence Kirkby continued to be an active participant in the fabric of our local society. She was a member of the Public Services Pensions Council, Lay Assessor for Public Appointments, Lay Assessor for Residential Homes, a Governor of Sacred Heart School and of Chapel House Middle School. She made the national headlines in May 2018 when she stood for election as a local council candidate at the age of 96 years.

Miss Kirkby has been an asset to our University, our City, our Society: indeed she has been an icon in the struggle to allow people to achieve their potential regardless of gender. She gave of her time and talent to help develop a fairer and more caring society, as demonstrated by her continuing active membership of Soroptimism for 46 years. She will be long remembered by everyone who came in contact with her.