Like most people, SI Salisbury members were shocked and saddened by the murder of Sarah Everard in March. An isolated incident, but all too common, sadly, and the public outpouring and reaction it caused has highlighted the issue of the safety of women and girls against violence. Women have felt able to speak out more freely about their experiences and there has been widespread support from both men and women along with calls for a change of attitudes, positive role models and building healthy relationships.  As members of an organisation whose key object is to make the world a safer place for women and girls, we felt that there was an important leadership role for us to take on this issue.

In the year to March 2020, 207 women were killed in Great Britain (England, Scotland and Wales), and in the UK some 1,425 women were killed by men in the 10 years to 2018, which equates to about one killing every three days. We decided to collect some local statistics for our area to decide whether there was a need for action in Salisbury. The police have responded to our request by supplying us with crime data where women or girls are the victims, from 1 Jan 2016 to 18 Apr 2021. 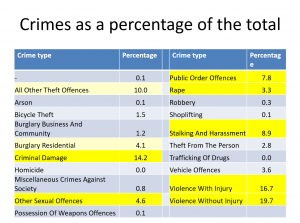 are a total of 6976 crimes in the data set. The highest proportion of crimes against women (25%) were those categorised as domestic abuse and in 40% of these incidents alcohol and drugs played a significant part.

Reassuringly, femicides in Salisbury are relatively rare, only three over the whole period, all of those shocking and very high profile incidents locally.  There were, however, 231 reported incidences of rape and a further 323 incidences of sexual assaults against women or girls in the five year period. 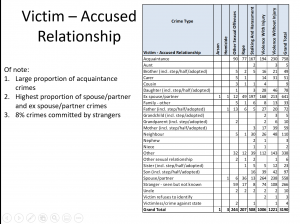 We are often told that, in most cases, the perpetrator is known to the victim, this is borne out by these statistics; 8% of crimes against women over this period in Salisbury were committed by strangers.

What can be done in Salisbury?

So, having studied these figures, we decided there is definitely a role for SI Salisbury in drawing together interested individuals and organisations, developing an initiative and an action plan with some specific projects to be undertaken in the short, medium and long term with the aim of making Salisbury a safer city. While our focus as an organisation is on the well being of women and girls, we are clear that a safer city for women and girls means a safer city for everyone.

Find out more about our Salisbury Women’s Safety Initiative here