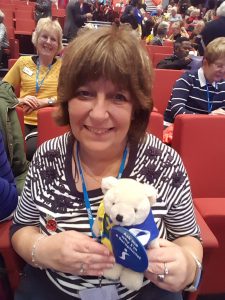 This year our attendance at conference may have been small – but it was perfectly formed – see the pic of Denise Powell and the Club’s mascot Sally Bear in situ at the Soroptimist International Great Britain and Ireland (SIGBI) Conference in Liverpool.

We were kept well informed with information from Denise, the SIGBI Conference website www.sigbi.org/liverpool2018 plus Facebook and Twitter too #SoroptimistLiverpool2018 Last year 11 of us went to the Conference in Cardiff, so let’s hope we can get a good turnout again for Bournemouth 24-26 Oct 2019 www.sigbi.org/bournemouth2019– put it in your diaries now so you don’t miss out!

Below is a great report with pics from Denise who represented our Club brilliantly – thanks Denise! 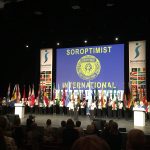 Conference this year followed the traditional pattern. It opened on Thursday night with the Flag ceremony, I find it quite emotional seeing the corners of the world that are covered by our Federation. This was followed by a rousing musical entertainment from ‘The Brothers Of Swing’ – they didn’t sing much swing music, but they did have some enjoyable anthemic numbers that has much of the audience on their feet, singing and boogieing, much to the amusement of my 32 year old daughter!

Friday saw the conference begin in earnest. The individual presentations are heavily covered on the 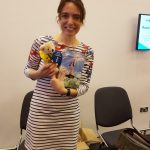 conference website www.sigbi.org/liverpool2018 so I won’t go into details about each one (pictured here with Sally Bear is Sally Kettle, an ocean rower and the first woman to row the Atlantic Ocean twice from East to West). Each segment of the day included presentations from various clubs about their programme action, Friday morning’s contained an update on the Kori project by SI Thames Valley from our own Region, a montage from many Clubs on their projects related to FGM shown by the SIGBI Assistant Programme Director (APD) for Violence and Conflict Resolution, a presentation from SI Bournemouth on their Education project, setting up a STEM Challenge, and a presentation by SI Madurai on their project in Environmental Sustainability area related to purifying water using rice! 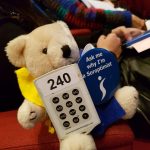 Friday afternoon at Conference brings the Programme Resolutions, where we were voting for the project (from a shortlist of 4) to become the next Federation project for the years. 2019 – 2021. We had decided as a Club to vote for the STEM project. After the first round of voting no project had a 50% vote, so the lowest 2 were discarded and the higher 2 were voted on again. The STEM project made it to the last 2, but in the final vote, the ‘Empowering Girls from Nepal’ put forward by SI Bridgend and District got the higher vote and was therefore selected.

There were 2 resolutions related to Climate Change – again these got through without much difficulty, although at Club we were concerned about what guidance we were going to get from SIGBI about what exactly we needed to do to lobby our government about Climate Change and even more so about the help we might get on lobbying about the criteria used to determine aid to Caribbean countries. But these resolutions were passed so we might expect that guidance to now be forthcoming.

After the Programme Resolutions, we get to the General Meeting – which will be reported on separately. 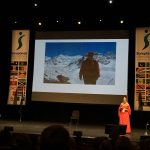 Saturday morning followed the same pattern as Friday morning, with a clutch of very interesting speakers (pic here is of Ellie Bird Lenawarungu Maasai founder of the Amuka Foundation in Kenya) interspersed with Club presentations on their projects. This time they covered the areas of Economic Empowerment (SI Heswell talking about their project related to a Women’s Centre set up to reduce the number of women sent to prison) and Food Security and Healthcare (SI East Grinstead showing their project working with “Tadpoles swimming project” to provide sessions for physically and mentally disabled people). 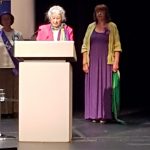 There was also a montage of activity related to 100 years of the Vote, an 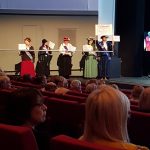 update on the Meru Women’s Garden Project, which is entering its last year, and a special presentation on the SI Convention, taking place in July 2019 in Kuala Lumpur.

To start the final session of the day there was a presentation from Toilet Twinning – this one felt very close to home given our involvement and the fact that my very own toilet is twinned, though we have some way to go to compete with some Clubs who have twinned whole cities and towns.

This was followed by the SI Best Practice Awards, where each APD picks out 3 projects in their area which are outstanding, and then selects one for the Award. We were nominated in the Environment category for our Tree Planting at Heartwood Forest, but we did not get the award, that going to SI Madurai for their water project.

The final part of the afternoon was the Keynote presentation from Sir Ranulph Fiennes, which was well worth waiting for.

As always, the conference finished with the Change of Insignia, President Sue Williams taking over and then the new Regional Presidents all receiving their chains of office from their predecessors.

There were many high spots to this Conference, especially being nominated for a Best Practice Award plus the usual pleasure in meeting old friends including Members we miss who have moved away like Hilary Ratcliffe. It is impossible to convey the atmosphere and the emotion of sitting in an auditorium with hundreds of like minded people (mostly women with a few men). It was a personal pleasure for me to be there again with my sister, who, being a member of a Club within the hosting Region was one of the Lead Stewards, and my daughter who also enjoyed hearing about the work that we as an organisation undertake. I believe Sally Bear, our Club Mascot, enjoyed her outing too, though she got rather less attention than last year in Cardiff! I would urge everyone to think about going, especially those who have never been, but also those who have been before as each conference has its own feel. Next year the conference is in Bournemouth, relatively easy for us to reach and I do hope that everyone will consider coming –  and supporting me as I take on the role of Regional President.