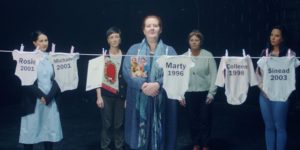 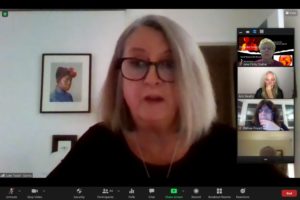 To mark the United Nations 16 days of activism against Gender Based Violence , Jude Tisdall presented the brilliant new 1 hour film about domestic abuse in the traveller community called “Never Going to Beat You”. The film was followed by a Q&A on Zoom. This event was organised by Soroptimist International St Albans and District. Jude Tisdall has been a trustee of Giants Theatre Company for many years and is a supporter of the work of The Travellers Movement. She is an educator and arts consultant and is passionate about enabling young people to realise their potential through education in its broadest sense.

For more information and resources go to: www.travellermovement.org.uk/advocacy-support/woman-girls/domestic-violence-and-sexual-abuse-project 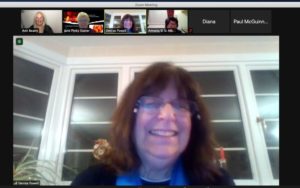 Jude Tisdall spoke of the six year journey, which began with Jennie Buckman (playwright and artistic director of Giants) and Jude first meeting with women from the traveller movement.   From the initial meetings and subsequent workshops, the women’s stories became a play – and later funding was found to make the film.   The purpose being to create and open a dialogue between the community and service providers.   When Jennie became terminally ill her son Michael, with Jennie, wrote the subsequent screenplay and then directed the film. The film is based on the stories of 18 women from the traveller community.

Everyone began the evening in the Zoom meeting and then watched the film on their own devices before rejoining everyone for the Q&A session.

A big question is what to do about supporting this group and preventing domestic abuse in a community that is hidden from most parts of our society. Jude is convinced that education is the answer and this film is part of that education process. The film was made just before lockdown and is ready to be rolled out to groups for training. Obviously different, less realistic materials will need to be produced for use with children. An important key to change is for the education to reach the perpetrators of violence. 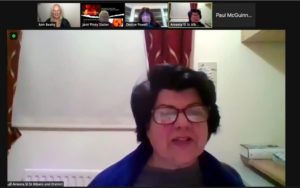 It is important to note that domestic abuse is not limited to any one community.    It is a problem that cuts across all communities – it is not age related – class, culture or gender related. There are often complex issues of shame and fear around this subject.

The film left us thinking there was a feeling of inevitability about the situation. What can we do? we feel helpless, guilty. The victim has to leave to stay safe. There are male victims too.

What support, advice is available about how to move forward? The theatre runs workshops as educational tools.

Jude responded that there are no quick solutions to domestic violence and that was why it was so important to make the film, to share the stories of the many challenges women face in getting the help they need. We hope this film will raise awareness of the challenges and the devastating effect of domestic abuse.

Please read below for more questions, answers, comments and feedback from the Zoom chat on the night. 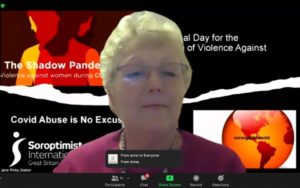 65 people joined us for the event from all over the UK – a mix of Soroptimists, professionals and campaigners working to end gender based violence and support victims. The event raised £200 for the Traveller Movement – much needed funds to get the film out to groups to educate, empower and enable the support of victims of domestic abuse.

There was an interesting discussion with lots of comments and questions, with not enough time during the Q & A to fully address them all, which shows the real need for this topic to be brought out into the open. Here is a selection of questions and comments.

Questions and Comments from the Zoom chat

What do you think needs to be done to get the message across?

The move from the perpetrator’s flattery, to coercive control, to alienation, to violence is reminiscent of far too many cases of domestic abuse.  We know that shame and fear keep it hidden, often in plain sight.  How do the women who have travelled this journey feel it could best be opened up and systemically challenged?

Really good point – how can one move from what is so graphically described to finding means of prevention and action?

The education needs to start with the young.

Totally, and what legislation is there to protect when the community are so closed.

This is exactly what the 16 days of activism are about. Making sure that such behaviour is never deemed as acceptable. Sadly a long way to go in some communities.

It is dependants more often that makes it harder for a person to leave. children, financial, erosion of self confidence and lots more happens.

It is also about how we support those who witness the abuse in all its forms.  For example, the children.

Agreed education of young children is so important. Education about bullying and encouraging boys to develop their self-esteem without feeling the need to feel in control of others, and without the need to become the man of the house/head of the household.

Thank you, that was an amazing film.  I think that domestic abuse/violence definitely is gendered, as do Women’s Aid, www.womensaid.org.uk/information-support/what-is-domestic-abuse/domestic-abuse-is-a-gendered-crime

Excellent film, feels very authentic. I did think it was interesting the commentary around ‘Violence is a sickness’- as isn’t this actually taking some of the blame away from the perpetrator?  As though it is not their fault and it is something that can’t be helped?  Was this intentional in the film? To show that perhaps one of the reasons people don’t speak up or try to intervene, is because they don’t feel there is anything that can be done about it? That it is just a part of life? (just exploring the use of this language).

Loved the Bridie character. LGBT is a whole other issue in the Traveller community.

This was very bravely told and acted.  Thank you for sharing. Should violence be described as an ‘illness’?

Soroptimist International supports the UN SDGs and the elimination of gender based violence is a key one.

Have you, Giants, been in touch with the various racial equality councils who I am sure would be interested in working with you to have this shown?

Comments/Feedback from the Zoom Chat

Fantastic to see so many Soroptimists from around the country

Welcome to all our Soroptimists from around the country and the world, and welcome to non-Soroptimists who have joined us.

Wow that was brilliant – very powerful

So powerful and brilliantly made.

A difficult watch, but a story that is important to share and reflect on

thank you letting us watch, powerful and moving as well as thought-provoking, feels like it needs a public information broadcast/message at the end

The character of Patrick was very well drawn. I would have liked to have understood Moira’s character better, but victims are often very passive and silent in these situations, so that is realistic

Powerful and moving, you were right to say it is hard to watch in places.  Can be related to any group of people not just the Traveller community.

That was a really impressive film which covered a huge amount of material – thank you for the opportunity to watch it.

Very good production and like what some else said this is defiantly relatable in all walks of life. Thank you for sharing.

Very believable…..which makes it all the harder. Those kicks and blows were amazing.

As a domestic violence champion in Milton Keynes I can think of a lot of people who should see this film.

It was a very powerful film, I hope that you are able to share it with as many people as possible. Thank you

As a statistic – Staffordshire Women’s Aid has seen a 77% increase in calls to the 24/7 helpline between 2019 and 2020, in the same timeframe requests for Refuge accommodation has increased by 85%, for Sexual Violence service up 42% and for Counselling services up by 137%.  This year has seen a massive increase in demand for services.

Thank you for organising this and extremely touched.

Many thanks for a really moving evening. Incredible film.

Thank you for inviting us to share this issue with us

Thank you so much  everyone

Thank you for the invitation and the opportunity to view such a powerful piece.

Thank you St Albans & District for the invitation to share this moving evening with you.

Thank you so much, that was so powerful and informative

That was fantastic. Thank you all

Thanks must got to the Club’s “Peace” Team for organising this event. Ann Beatty introduced us to Jude Tisdall and was behind making it happen with particular support from Denise Powell, Ameeta Sabharwal and Louise Marron. 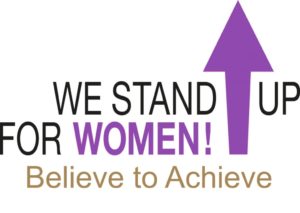