Since the lockdown, SI Southport members have been keeping in touch using the wonders of Zoom. In ‘real life’, our club meets twice monthly so we decided to retain this structure and have one meeting as a Club Meeting, where we discuss SI activities, and the second as a more social event.

President Rosemary Moore suggested the theme of ‘Fun with Hats’ for the May social meeting. Members were asked to wear a hat that had some significance and to tell the tale of the hat.

As the photo shows, there was a great response.

Ann Bryan (top row on the left) – the picture is bit dark as Ann was sitting outside in the sun!) told us about her hat – she said she has difficulty finding a hat that fits, until she found the modest sunhat she is wearing. She bought in La Gomera and has worn it on every holiday abroad for the last 10 years.

Carol Hill (4th row, second from left) said her hat came from Wimbledon. She and husband Anthony attended the tournament on ‘Manic Monday’ watching Andy Murray and several other players. On the same trip, Carol was run over by a shopping trolley – the ‘driver’ was a very apologetic Lynda Baron (the actress who played Gladys Emmanuel in ‘Open all Hours’)..

Dot Massey (2nd row, on the right) wore her steward’s trilby from the 75th SIGBI Conference in Harrogate, where she helped the flag bearers manoeuvre their flags into the auditorium. Dot’s team leader was Joan Spiby and all stewards wore dark blue suits and a trilby.

Carol Cookson (2nd row, second from right) donned the hat she bought in Virginia. It proved useful when she was were on her way down the Appalachian Trail and was confronted by a bear and 3 cubs, Instead of following advice to climb into the nearest tree, she threw her hat at them and then run screaming back up the trail!!

Ghislaine Fletcher (top row, 2nd from left) wore a hat from London 2012, when she was a London Ambassador at Victoria Park during the 2012 Olympic Games. She had a visit from her boss – Boris Johnson, who was Mayor of London at the time. That was the day Boris got caught up on the zip-wire at Victoria Park – and the now-famous photo was taken!

President Rosemary (4th row, third from left) said her hat dates back to the early 1960s, when the Beatles were playing at the Odeon in Southport. While she and a friend were waiting at the stage door, the Beatles arrived in a transit van and John Lennon jumped out straight onto Rosemary’s foot, leaving a shoe imprint on her white socks. Her friend says to this day she should never have washed those socks!

There were several other fun stories – and we learned not only about the hats, but also quite a lot about our SI friends!. 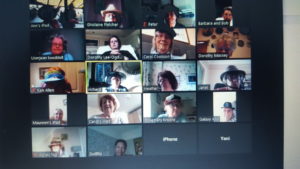