At our November speaker meeting, we were delighted to welcome Keith Porter, the coxswain of the Southport Offshore Rescue Trust (SORT). The trust is an independent charity that provides a 24-hour life-saving service around the Southport coast. 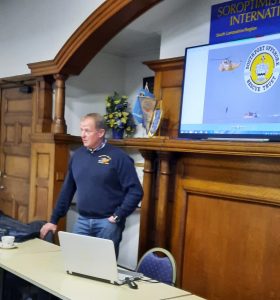 In words and slides, Keith explained the history of the service, which began 20 years before the RNLI was formed. In the 19th century, Southport’s coastline was one of the busiest and most dangerous in the country and many hundreds of people were rescued using oar and sail driven boats – with the crew wearing oilskins as their only protective clothing. In 1886, Southport’s lifeboats were deployed to rescue the crew of the barge ‘Mexico’ – 14 crew members from the Southport Lifeboat and all 13 crew members of the St. Annes Lifeboat lost their lives in the rescue, with only 2 survivors. This is still recorded as one of the highest losses of life in lifeboat history.

The RNLI withdrew its lifeboat service in Southport in 1925 and the town was served by crews from other parts of the coast. However, by the 1980s, after a series of incidents off our coast, the local residents campaigned for a local rescue service – and in 1989, our local independent lifeboat service, Southport Offshore Rescue Trust, was born.

The service is funded by donations and crewed by volunteers. They maintain modern and sophisticated equipment – well equipped boats, quad-bikes and even drones – as well modern protective equipment. Keith told the club that he had been involved with the lifeboats for 30 years – and his brother, daughter, son-in-law are also members of the crew. Despite being volunteers, the crew undergo rigorous training in the newest technologies and have regular drills to ensure that they are ready to respond. Through donations, a new lifeboat house is soon to be commissioned, which will replace the current building which was built in 1886 and is no longer fit-for-purpose.

We are indeed very fortunate to have such a brave, capable and dedicated group of men and women who are willing to give their time and energy – and risk their lives – for the protection and safety of others. 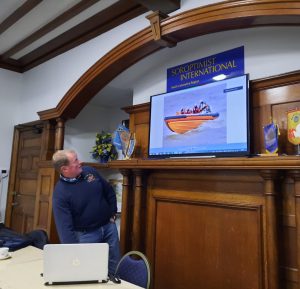 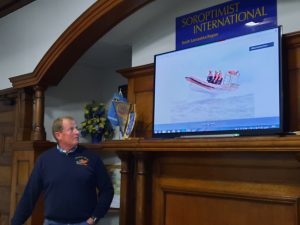