It was certainly a very special September for so many reasons.  With so many firsts it was a fabulous beginning to Autumn.

We got off to a flying start with coffee and cake at Ann P’s in aid of Friends of Sick Children in Malawi.   With the added bonus for our more organised members to bag some bargains for Christmas.   What’s not to like 🙂

Our Club has enjoyed a long and special relationship with Friends of Sick Children in Malawi through Gordon Cowie.   It’s always heartening to hear how things are improving in the paediatric unit of Queen Elizabeth Central Hospital in Blantyre.   However it is still salutary to learn how much they achieve with so very little.   The £340 we raised we know will be used to great effect.

More fun was to be had at our first face to face meetings.

We were delighted to acknowledge Marion’s 40 years of membership as a Soroptimist.   Not least as for once we managed to turn the camera on her and get a piece about her in the local newspaper!    It’s normally Marion who is behind the camera.   In Club she is renowned for her photographic capabilities.   Somehow she always manages to show us at our best, so we were thrilled to get a photo of her for a change!

Zoom has been very helpful for keeping in touch during the pandemic and Lockdown.   But there’s nothing like actually meeting up and hearing how the various groups especially Programme Action have been getting on. 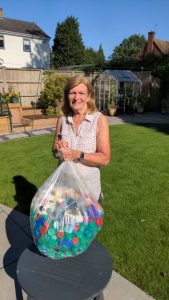 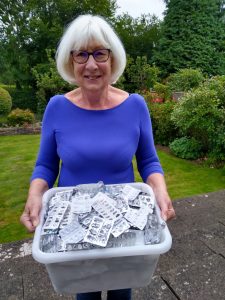 Refuge Well Being Fund donations – by the end of August £905 had been collected. Sue will be asking Refuge about their current needs. We may get match funding from Lions as last year.

Programme Action Awards at Midland Arden Region meeting – Jean presented our ‘partnership’ (one of the 5 P’s) work with Lions.    Last December Lions supported our Club by providing furniture from their store for the Refuge.

Not only were we able to hold our first business meeting in September, we also celebrated our first dinner meeting!   Who says that a baked potato with a choice of fillings can’t be considered fine dining when in the company of friends!

As President Julie so eloquently put it

Dinner last night was excellent. The food was delicious and abundant, the tables elegantly set with artfully arranged flowers and conversation flowed.
Our speaker, Anna, gave a talk about Dogs for Good which interested and entertained but also gave us some insight into the immense challenges many people face every minute of their day but are made easier to meet by the company and help of their assistance dog. An admirable and moving comradeship.

Many thanks to Carole and Amanda for leading the newly fledged Furniture and Catering Groups and to their good humoured, efficient and energetic volunteers – which in fact comprised virtually the entire group of members present! As someone remarked, “It’s what Soroptimists do”. And from where I was standing, you all made it look effortless.

We were able to do some more fund raising for The Parenting Project at our stall at the Kenilworth Lions Charities Day.

Had we been selling hot cakes, they could not have flown off the stall any faster than Marion’s beautiful greetings cards.  However we were relieved when Marion arrived to take photos to document the day.   In addition, she was able to explain the name of the flower or  location of the stately home to fascinated customers who promptly snapped them up.
Have a look at the  photo below. You’ll see, in the left hand corner, the cute cross-stitched ‘Winnie the Pooh’ made by Jean. A grateful Grandfather swooped on this as ‘the perfect gift’ for his grand-daughter’s sixth birthday the following day – he’d been at loss as to what to get her till he saw Jean’s work. 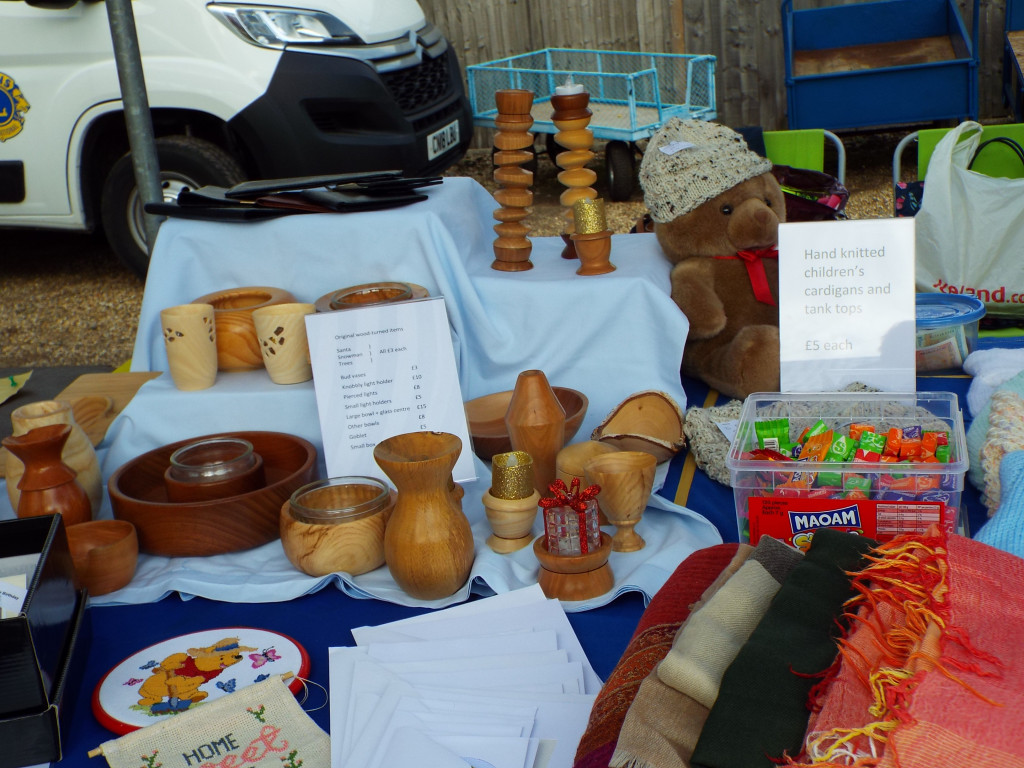 If only we’d had more of Carole’s wood-turned Christmas decorations!    We could have sold however many Carole could have made; they were really popular. One very pleased customer bought one of Carole’s bud vases to show off just one glorious dahlia bloom she’d found at another stall.
Ex mayor Alison Firth was thrilled with the selection of gorgeous scarves Ann had brought.  She tried on several before settling on two (and looking rather regretfully at the ones she had to leave behind).
Gill explained the art of Furoshiki – gift wrapping Japanese style using fabulous fabrics. Customers were enthralled and one bought a piece of fabric simply to have it framed as decoration.
We had five enquiries from women interested in finding out more about Soroptimists.   Sharon was able to give them details of how to access our website easily.
And our stall made a whopping £185 for the Parenting Project!    This is in addition to the £220 raised by our 100 Women of Empowerment Trail – yay!!!

And finally we had a Grand Day Out

The weather was kind as we watched Isobel Smith, a recent President of SIGBI unveil our beautiful Soroptimist sculpture at the National Memorial Arboretum.   It was poignant event as it was at the last Midland Arden Region meeting before the first Lockdown that the inception of this sculpture was announced.    So much has changed during that time.   However our sisterhood endures.   For instance women who had travelled some distance were packed off with party bags from the fabulous afternoon teas.