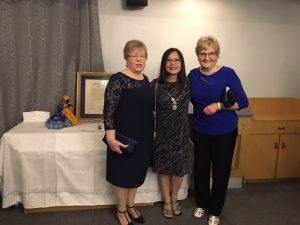 Pres Kam would like to express her thanks to Eileen Stewart, Anne Bull, Ann Sale, Sue Challis, Diane Milner, Marion Bates & all the Hostess staff beavering away behind the scenes. The speakers all spoke eloquently on the night. The wonderful entertainment was provided by the Yorkshire band “ Recycle” whose repertoire of music runs from the 60s, 70s & 80s