Members of SI Salisbury spent a very chilly Sunday raising awareness of domestic abuse as part of #OrangetheWorld 16 days of activism against women and girls. There was a great deal of interest from men as well as women, as well as good feedback on the recent community conference we held in partnership with Safer and Supportive Salisbury. 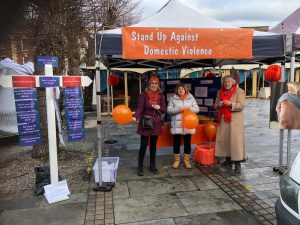 This year the Club chose the theme of ‘signposting’ the signs of abuse to raise awareness, because individuals and those who support them do not always recognise the symptoms of a bad relationship until too late. The stall  received interest from both men and women and the orange balloons and fresh oranges were a great hit with youngsters.

Goodie bags were handed out which included bookmarks on what a heathy relationship looks like, a useful list of contacts for the support services that are available locally to help at times of crisis, information about the Salisbury Women’s Refuge and orange face masks.