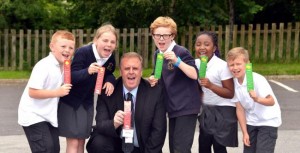 This article appeared in the Telegraph and Argus newspaper on June 22nd 2016.

Pupils make their mark with sexual exploitation campaign
A BRADFORD-WIDE campaign to help young children develop healthy, safe relationships and avoid sexual exploitation has been launched at a Bingley primary school.
West Yorkshire Police and Crime Commissioner Mark Burns-Williamson was on hand for the start of the Friends Bookmark Campaign, invented by pupils at Trinity All Saints CE Primary School, today.
The special bookmarks were developed with the Bingley branch of Soroptimist International (SI), with

with the financial backing of the West Yorkshire Safer Communities Fund.

One side is red with a list of warning signs and behaviours that suggest that someone wanting to ‘be your friend’ may have a hidden and dangerous agenda.
The reverse side is green and lists the actions and behaviours a good friend would exhibit such as politeness, encouragement and a willingness to listen.
The ideas came from classroom work and discussions on friendship and were created by year three and year five pupils at the school in Church Street.
The head teacher of the school Jane Glendinning said she was delighted that her pupils were the inspiration for a district-wide campaign.
“It’s humbling to think that the work of our pupils is being used to support all children across Bradford to ensure that they are only involved in healthy relationships.”
Mr Burns-Williamson said; “The ‘Bookmark’ project is a great idea for children.
It’s part of their education, giving them a benchmark on how to live their lives. Longer term it will help them as they grow and integrate into society in general.
The marvellous displays and the issuing of friendship ‘Bookmarks’ makes it obvious how important this project has been to the schools’ young people.
“The whole process demonstrates what can be achieved by working together, an important lesson at such a young age, which will help them as they go forward in life.
“I’ve thoroughly enjoyed my visit to Trinity All Saints CE Primary School and being shown around by its friendly, keen pupils.”
Vice president of SI of Yorkshire Chris Clark, who is also a governor at the school, said: “The ‘Friends’ bookmark has been developed by children at the school with the aid and consultation of a local Personal, Social and Health Education (PHSE) expert.
“The grant from the Safer Communities Fund means that every primary years aged child at every school in the Bradford area will receive a bookmark.
“We’re suggesting it is backed up by PHSE lessons so recipients fully understand the meaning and they become a powerful source of support to all young people, especially those who may find themselves in vulnerable situations.”
The bookmarks, and supplementary teaching resources, will be given to all schools in Bradford.