Sixteen Days of Activism and the November 2018 ‘Orange’ Campaign: What’s it all about? Read our diary

Today is the 25th of November and is the UN Day for the Elimination of Violence Against Women. It is also the start of 16 Days of Activism Against Gender Based Violence. So we are ‘oranging the world’ for the next 16 days. 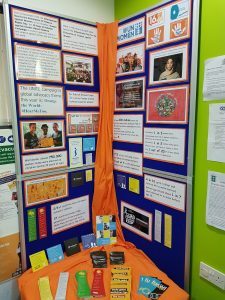 What is the historical significance behind the International Day for the Elimination of Violence against Women?
It is on this day in 1960 that the Mirabal sisters, political activists in the Dominican Republic, were assassinated.
The three sisters, Patria, Minerva and Maria Teresa, also known as the three “butterflies”, were killed because of their activities against the dictatorship of Rafael Trujillo.
The corsage worn by the stewards at our Regional Council Meeting and Yorkshire Lunch had a butterfly in memory of the Mirabal sisters. 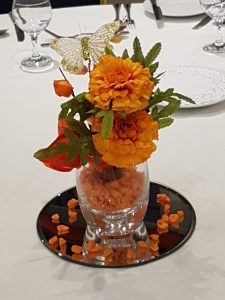 Globally, one out of three students (aged 11 and 13 to 15 years) have been bullied by their peers at school at least on one day in the past month, with girls and boys equally likely to experience bullying.
However, boys are more likely to experience physical bullying than girls, and girls are more likely to experience psychological bullying, particularly being ignored or left out or subject to nasty rumours.
Girls also report being made fun of because of how their face or body looks more frequently than boys.
School-related gender-based violence is a major obstacle to universal schooling and the right to education for girls.

At least 200 million women and girls alive today have undergone female genital mutilation (FGM) in the 30 countries where we have representative data on its prevalence. In most of these countries, the majority of girls were cut before age five. With population movement, female genital mutilation is becoming a practice with global dimensions, in particular among migrant and refugee women and girls.

At our Federation Conference in Liverpool we heard from Dr Ann-Marie Wilson, the Chief Executive from the Charity – 28 Too Many, of how she seeks to bring together and empower groups combating FGM in African countries. Her strategy includes advocacy, networking, lobbying and providing educational resources on FGM.

Then at our November Regional Council Meeting we heard the very moving story of a young women who had undergone FGM. As a result, she continues to have ongoing medical issues.

It is vital that this harmful cultural practice is eradicated.

Child marriage is a violation of human rights that robs girls of their childhood. Child brides are forced to drop out of school, have children before they’re ready and are often subjected to a life of violence and abuse.
41,000 girls are forced into marriage every day, some as young as 8 or 9 years old.
70,000 girls die in labour every year.
Child marriage frequently results in early pregnancy and social isolation, interrupts schooling, limits the girl’s opportunities and increases her risk of experiencing domestic violence.
Although child marriage can involve both boys and girls, the impact on girls is much greater.

Today we raised awareness of violence against women in our local supermarket whilst fund raising for the Together Women Project. The Cluster TWP Project was as direct result of work undertaken by the UKPAC in partnership with the Prison Reform Trust and is focused on empowering women to promote realistic change within their lives.
Money raised through the Chocolate Tombola will provide a Christmas party for the women and presents for both the women and their children or grandchildren. 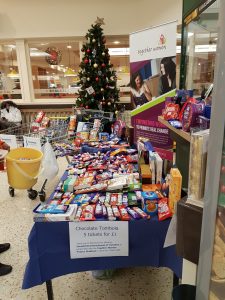 One in 10 women in the European Union report having experienced cyber-harassment since the age of 15 (including having received unwanted, offensive sexually explicit emails or SMS messages, or offensive, inappropriate advances on social networking sites). The risk is highest among young women between 18 and 29 years of age.

Children and young people can be groomed online or face-to-face, by a stranger or by someone they know – for example a family member, friend or professional.
Grooming is when someone builds an emotional connection with a child to gain their trust for the purposes of sexual abuse, sexual exploitation or trafficking.

At the Women in Keighley event last week we heard about the journey of a young girl who had been groomed, trafficked across cities in England, sexually exploited, abused, tortured, demeaned and badly beaten and left for dead. On one occasion she was even bailed to live with the parents of her perpetrator!
She eventually escaped from her perpetrators and has been feminist and activist ever since – lobbying at the highest levels that violence against women is totally unacceptable.
Fiona Broadfoot is now the Chief Executive of her own company. The ‘Build a girl’ project with year 5 and year 6 pupils provides a safe and therapeutic environment for girls and young women to ‘Build A’ unique self by raising aspirations and self-esteem. She is committed to educating and empowering girls and young women to make safe and informed choices and healthy relationships.
She also works with young girls at risk of child sexual exploitation, doing her best to stop other teenagers falling into the trap in which she found herself.

Women and girls across the world continue to experience violence and abuse. These acts are frequently overlooked by their local communities or may even be invisible. This results in survivors routinely being shamed into silence.
In order to end violence against women and girls, it is important to provide a safe and just place where survivors of violence can speak up and seek justice.
In addition, violence against women cannot be eradicated without investing in gender equality.

Violence and abuse against women and girls is ALWAYS wrong and is NEVER acceptable.
Only the person experiencing the abuse can decide what course of action they would like to take.
However, breaking the silence can be extremely painful so it is essential that the person is given the appropriate support in a safe environment without fearing she is being judged.

Children and young people can be groomed online or face-to-face, by a stranger or by, someone they know. Grooming is when someone builds an emotional connection with a child to gain their trust for the purposes of sexual abuse, sexual exploitation or trafficking.
Cyberbullying includes:
• sending abusive or threatening text messages
• creating and sharing embarrassing photos or videos
• excluding children from online games, activities or friendship groups.
This demonstrates the importance of statutory relationship education. This can be supported well by the use of SI Yorkshire’s Friends bookmarks.

Some recent research suggests that older people are often ‘hidden’ victims of domestic abuse. They frequently experience abuse for twice as long before seeking help. Also older victims are less likely to attempt to leave their home before accessing support. Therefore, it is important all women and girls including the older person suffering from domestic abuse can access timely, tailored support services to minimise long term mental health issues.

The UN WOMEN website states that, ‘Violence against women and girls is a grave violation of human rights. Its impact ranges from immediate to long-term multiple physical, sexual and mental consequences for women and girls, including death. It negatively affects women’s general well-being and prevents women from fully participating in society. Violence not only has negative consequences for women but also their families, the community and the country at large. It has tremendous costs, from greater health care and legal expenses and losses in productivity, impacting national budgets and overall development.’
Over many decades of mobilisation by civil society and women’s movements such as Soroptimist International have put ending gender-based violence high on national and international agendas. An unprecedented number of countries have laws against domestic violence, sexual assault and other forms of violence. Challenges remain however in implementing these laws, limiting women and girls’ access to safety and justice. Not enough is done to prevent violence, and when it does occur, it often goes unpunished.

10th December 2018 marks 70 years since the Universal Declaration of Human Rights was signed.
The Declaration sets out universal values and a common standard of achievement for all peoples and all nations. It establishes the equal dignity and worth of every person.
Soroptimists continue as strong advocates of this universality of human rights through their wide ranging projects at local, national and international levels. 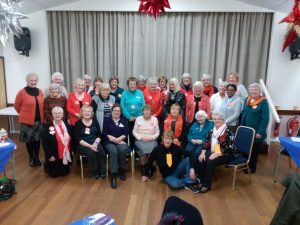