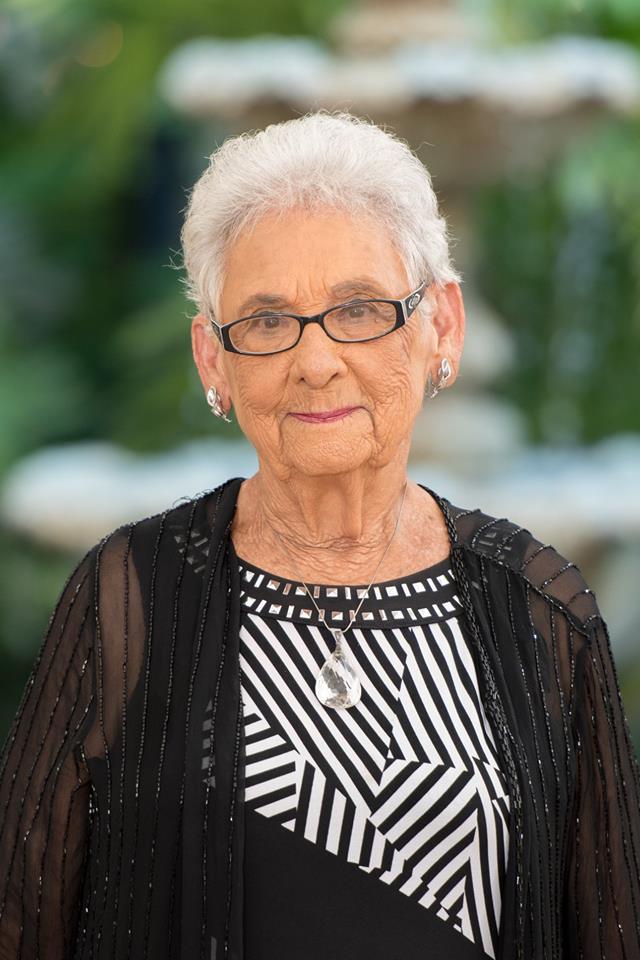 I met Ursula at the chartering of SI Esperance last December. I found her warm and welcoming. For a moment I sat alone as others were busy getting on with ensuring the event went well. But, Ursula intercepted that brief moment of solitude with a pleasant smile and conversation. I later found out that she was one of four generations of women involved in the event and by extension Soroptimist work. I therefore wanted to get to know the 92-year-old matriarch of the family. 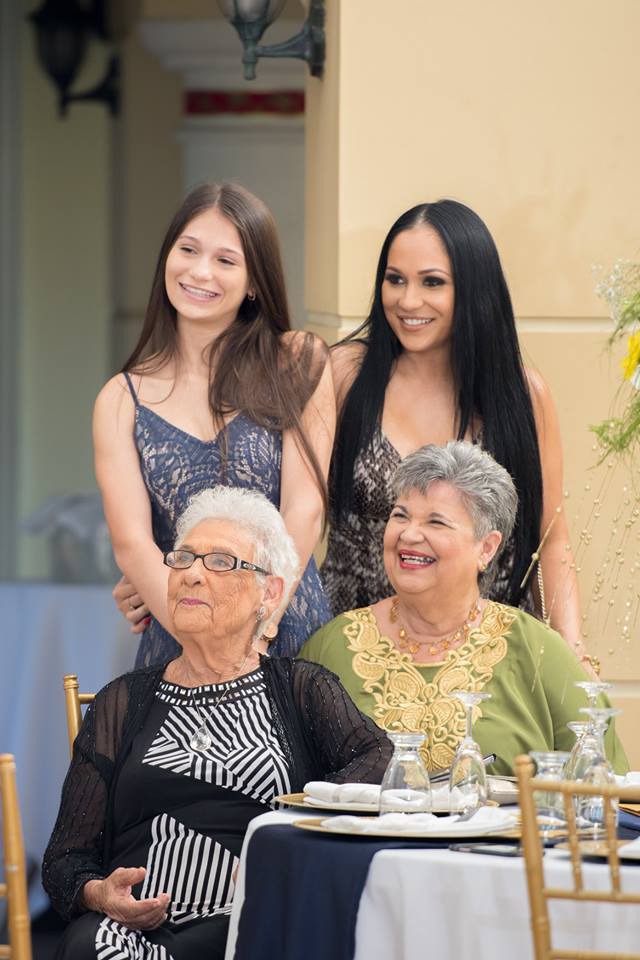 According to legend, St. Ursula was a woman and a martyr shrouded in mystery. In fact, it is said that St. Ursula started what could be considered as the world’s first women’s movement in history. Like her name sake, perhaps it is that air of mystery about Ursula de Castro that sparked my interest.

Her sister Soroptimists in Trinidad and Tobago have lots to say about Ursula. But first, I needed to hear directly from Ursula and therefore a telephone conversation was in order.

I dialed her number and a gentle voice answered, ‘good evening’. It was Ursula who answered, and a pleasant conversation ensued.

Me: Is this Ursula? It is Sisporansa from SICN in Barbados.
Ursula: Oh, hi. How are you?

After catching up, I started to pose questions to lift that veil of mystery of Ursula de Castro.

Ursula got married in 1948 to the handsome Victor de Castro, however, became a widow in 1990. She has 2 children, 5 grandchildren and 5 great-grandchildren. Ursula started the world of work in administration as a typist, but like many women, chose to be ‘a full-time wife and mother’. As the children grew older, the chapter of being a ‘stay at home mom’ came to an end and she decided to pursue her own dreams. She enrolled in a course and later decided to be among that special and brave group of “women in business” by starting her own florist shop. Despite her country’s economic challenges, she has managed to maintain a success business for over 40 years. 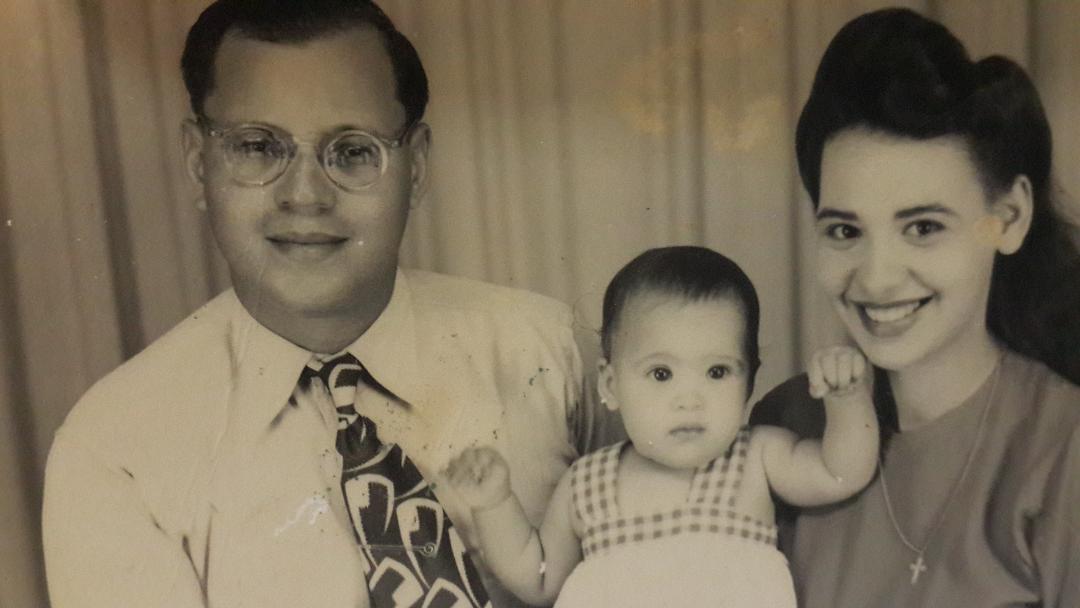 Me: When did you become a Soroptimist?
Ursula: I joined in 1979 and was President between 1984-1986. I became National Council President for 2 years shortly afterwards. I represented Soroptimist International San Fernando at Caribbean Area Council (now SICN) for many years and was happy to make friends with Caribbean sisters. I also represented that club at SIGBI.

Me: Why have you remained all these years?
Ursula: I wanted to see women progress.

Me: Are you active in other community work?
Ursula: In addition to my work in Soroptimists, I sit on various committees and working groups that focus on human rights issues including one that advocates for the elimination of violence against women.

The issue of abuse of women has always been an area of concern for Ursula and she has committed her time and lent her voice to the cause. 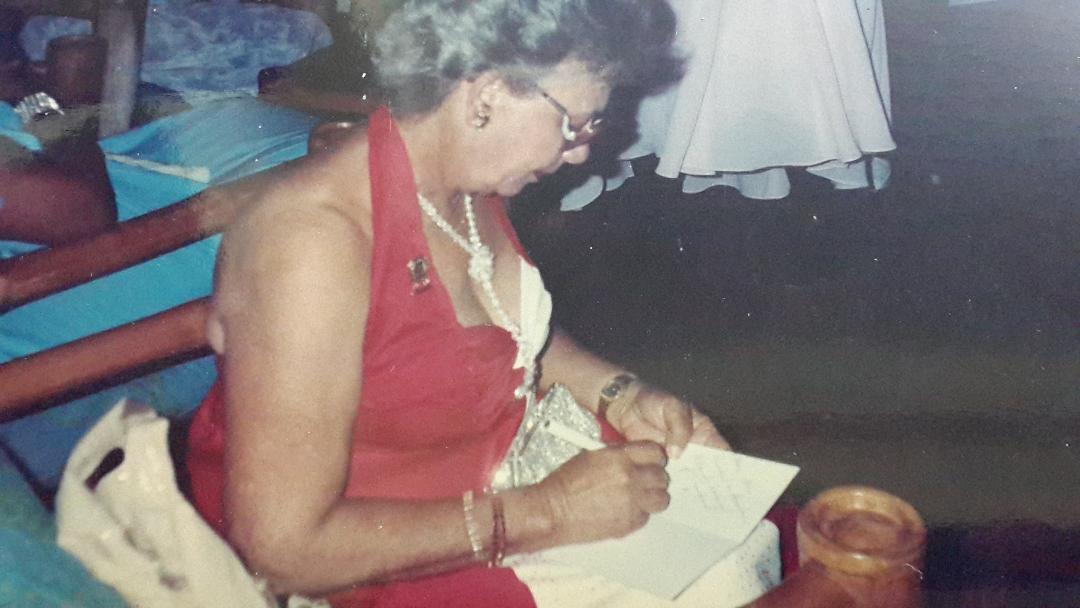 Ursula at a Caribbean Conference in Anguilla the 1980s

Me: Do you have a hobby?
Ursula: I love all crafts and gardening.

Me: What’s your favorite dish?
Ursula: I particularly like ribs.

At the end of the charter, we had a bit of dancing and I can recall Ursula making a few moves of her own and I therefore recognized that she has an appreciation for the arts and music.

Me: Do you have any special genre of music?
Ursula: I like many types of music – Golden Oldies, semi classical, light classics, smooth jazz and some recent pieces.

As Trinis are now celebrating their annual carnival, I had to find out if Ursula was a carnival fan and played mass in her youth.

Me: Did you participate in Trini carnival?
Ursula: I used to go to Carnival fetes, but never played mass on the street. 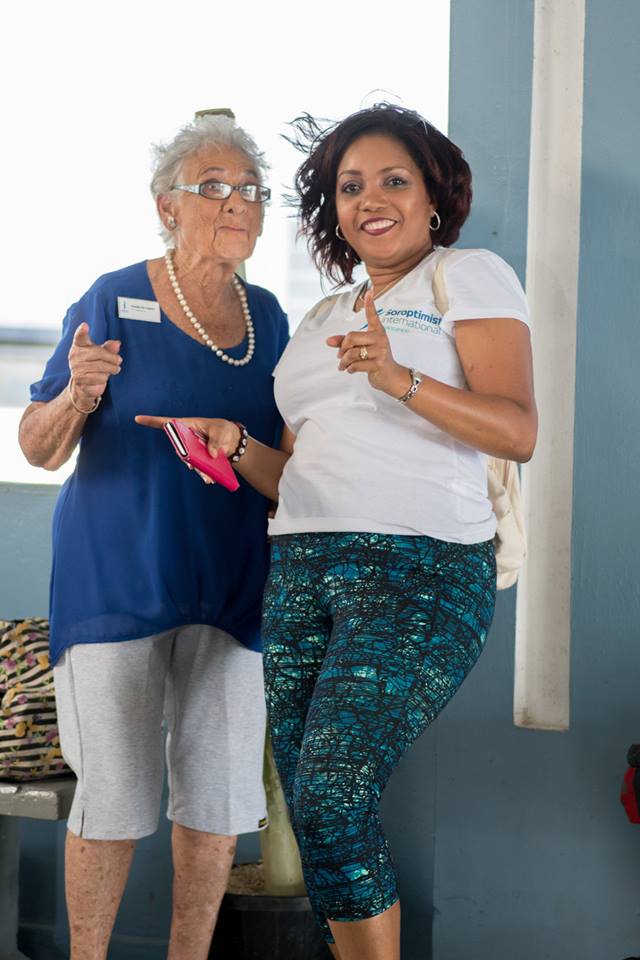 I could see that Ursula is a woman of strong faith and that she has a passion for young people and is particularly concerned with the direction the next generation is heading.

Me: What message do you have for the young Soroptimists?
Ursula: Treat other members as you would like to be treated.

Me: What message do you have for young people, particularly women?
Ursula: Respect yourself at all times so that others can respect you.

Me: What changes you would like to see in your community?
Ursula: I am looking forward to a time when women can walk the streets without being harassed and provoked.

As we ended our conversation, I could not help but to reflect on her name sake, St. Ursula, the warrior princess, the fearless and the inspired leader of women. And like a true leader of women, Ursula had a message for women and shared her favourite verse.

Keep us, O God, from pettiness;

let us be large in thought, in word, in deed.

Let us be done with fault-finding and leave off self-seeking.

May we put away all pretense and meet each other face to face,

without self-pity and without prejudice.

May we never be hasty in judgment and always generous.

Let us take time for all things;

Teach us to put into action our better impulses,

Grant that we may realize it is the little things that create differences,

that in the big things of life we are at one.

And may we strive to touch and to know the great,

common human heart of us all,

and O Lord God, let us forget not, to be kind! 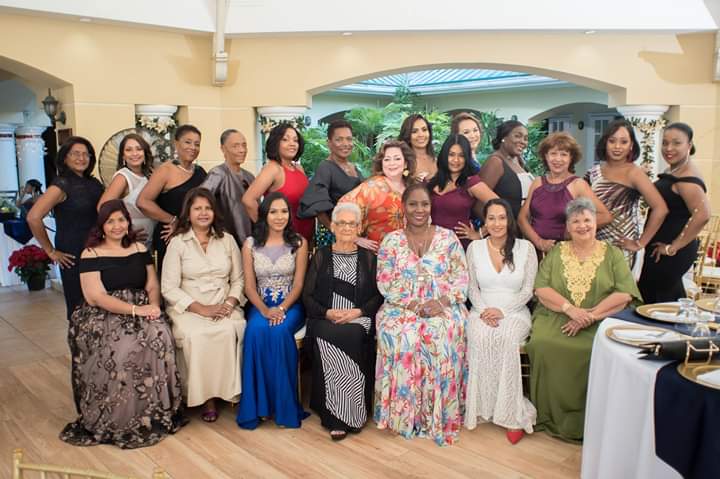 Ursula is indeed loved and respected by her Soroptimist sisters and their comments I have shared below:

Cheryl Boodoosingh, President SI Esperance ~ When I think of Ursula, I think about warmth, energy, fun and the ability to be a part of any group, regardless of age or situation. She is the salt of the earth, and like salt, makes everything better.

Denyse Ewe, President Elect SI Esperance ~ At our SI Esperance Charter, it was an honour to be in the presence of this ninety-two year old Soroptimist who is as active as ever. She has always been an inspiration to me – her special blend of pragmatism, humour and genuine love for others makes her a truly special woman and no doubt a fitting matriarch of our new club.

Rowena Wattley, Former Soroptimist Club President ~ In forty years I have never seen Ursula really angry. Even if she was annoyed, she would hold the peace and be ever gracious.

She is an artistic florist and an inspiration to me, because of her persevering spirit and her love of her art which is her work.
She is a Soroptimist to the core. 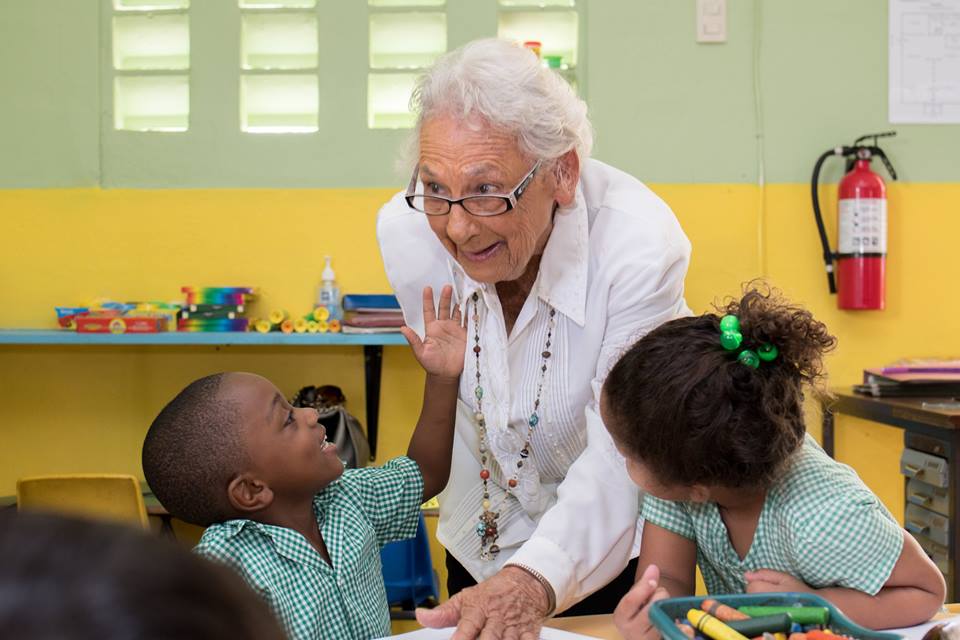 Ursula is ‘hands on’ at projects.

Marilyn de Castro-Lalla, Communications Officer SI Esperance and Ursula’s daughter ~ I grew up with both my parents actively involved in community service. I think my mother has assisted every possible group in San Fernando, serving every age, stage, ability or disability.

Soroptimism, however, has been her constant. In her time, she read everything she could get hold of that was published by SIGBI and attended every CRC and SIGBI Conference that she could. She loved, and still loves, being involved hands on in projects. Since she joined Soroptimism 39 years ago, she has provided all the flowers for both of her clubs, and frequently for others as well. 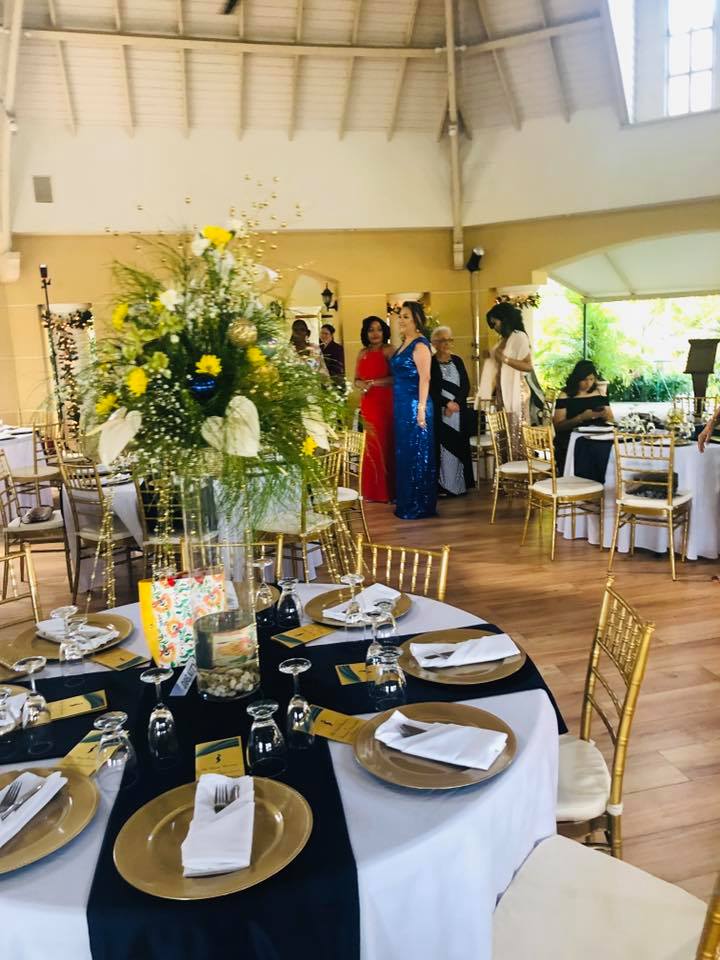 Ursula de Castro’s floral contributions have been seen at her club’s and frequently at other clubs’ special occasions for almost 40 years.

My mother has never been one for seeking the limelight, but if pushed into it, would give it her all. She is happier supporting, assisting in the background to help others to excel, to ensure excellence.

Her family is everything, but there are many others who have been fortunate enough to be included in that orbit and benefited from it. When I think about my mother, I think about the words of the song Wind Beneath my Wings,

“Did you ever know that you’re my hero,
And everything I would like to be?
I can fly higher than an eagle,
For you are the wind beneath my wings.”

Tara Pollonais, PAO SI Esperance ~ I’ve had the privilege of knowing Ursula for over 20 years. She truly epitomizes sisterhood. She is kind, compassionate and always has something positive to say about everything and everyone. She can frequently be heard saying, 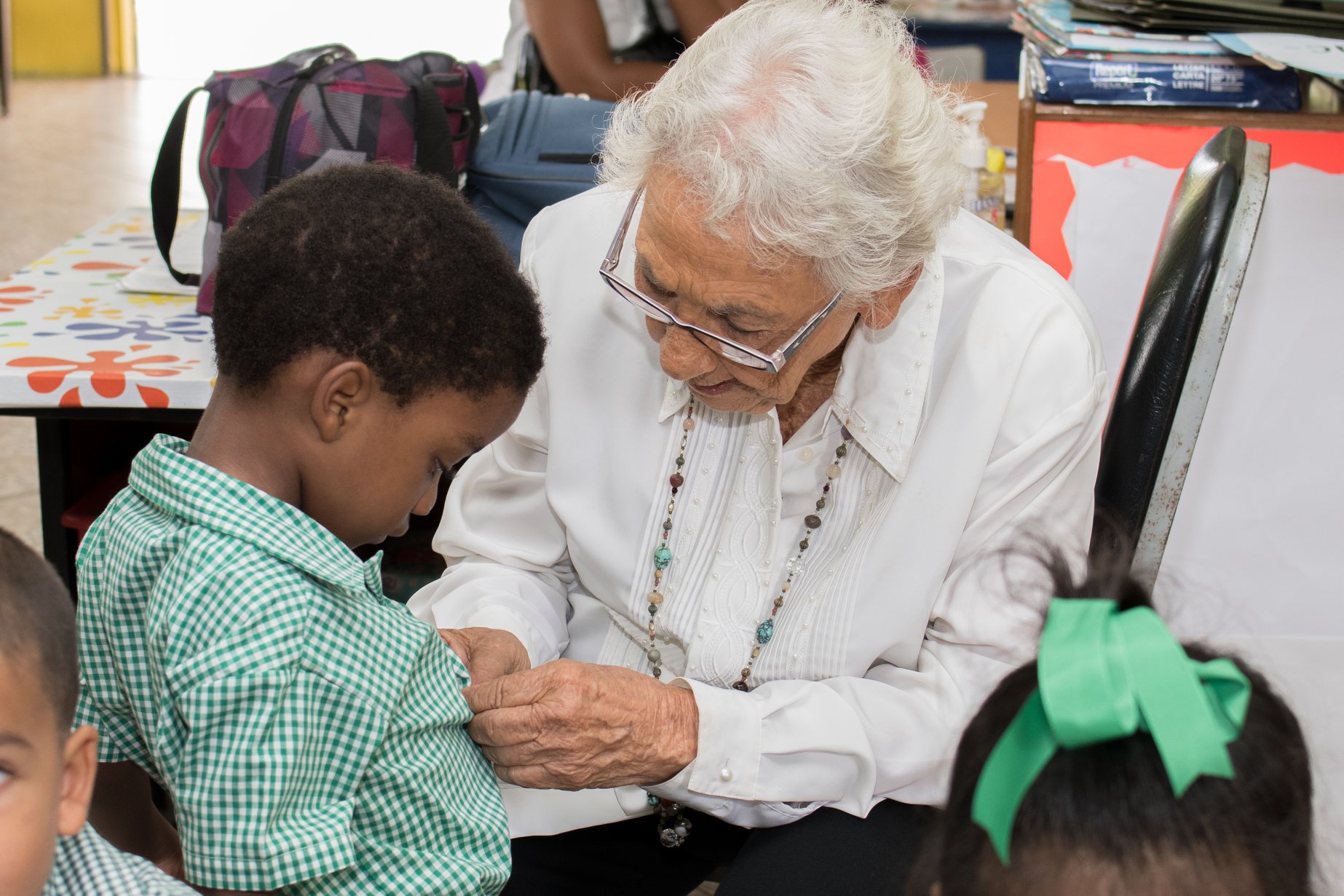 Ursula de Castro is always ready to help anyone who needs it.

Chinara Griffith, newest member of SI Esperance ~ From inception, Ursula has been consistently kind hearted, always willing to support the consensus of goodwill, focused, caring and an example of a graceful Soroptimist. 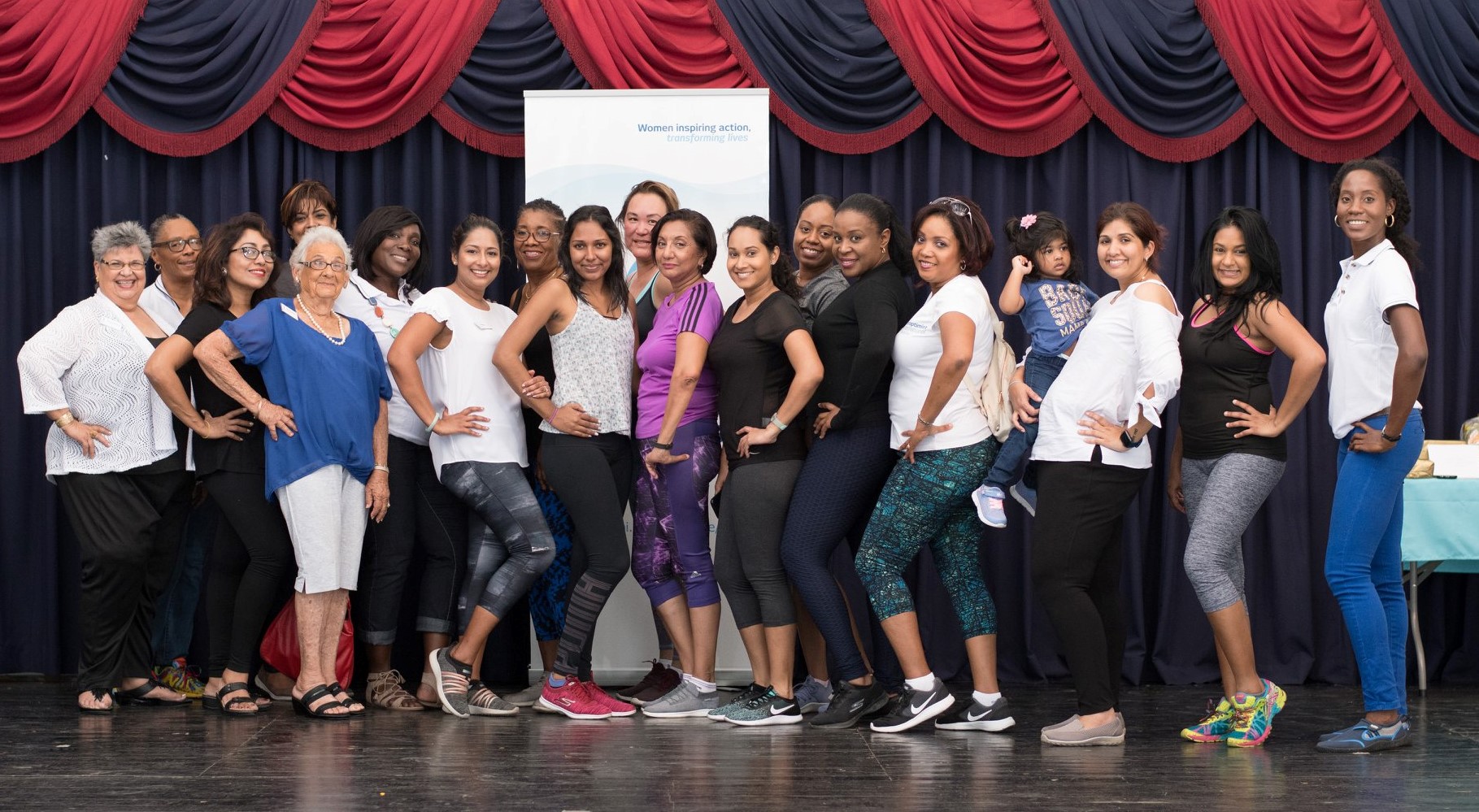 Ursula is a very active member of SI Esperance.