The Dental Healthcare Screening programme took place on 17th February,2020 for the children of the La Romaine Migrant Support Group (LARMS). A bi-lingual presentation was given and aimed to educate the children about the importance of good dental health. This was followed by a dental screening done by two dentists, who are also members of Soroptimist International Esperance.  Advice and emergency treatment were provided where necessary.

This project was in recognition of Dental Health Month (February). It gave the two dentists in the club an opportunity to use their professional skills to help the less privileged. Club members had previously worked with the LARMS group teaching English language skills through traditional teaching and involving  them in singing English Christmas Carols and drama in ‘The Christmas Story.’ The children left Venezuela because the collapse of the economy made it preferable to come to Trinidad and live in what we consider to be substandard conditions. The migrant children only have access to emergency medical care, and poor health and diet can lead to dental problems.

The programme was presented in both English and Spanish and aimed to educate the children about the importance of good dental health and how to achieve it. After the presentation, which was in both Spanish and English, the children were given dental examinations by the two participating dentists, who are  members of Soroptimist International Esperance. The parents and co-ordinators at LARMS were made aware of the children that required urgent dental care.  After the screening, the children were given “care packages” containing a toothbrush, toothpaste, floss and information in Spanish for their parents so that they could reinforce what they learnt.

This project educated the children and the parents present about the importance of good dental health and how to achieve it.   It is our hope that these guidelines will be followed by the children and their parents. The screenings brought to light that quite a few of the children had severe dental infections and these are considered medical emergencies. The dentists present co-ordinated with LARMS to enable the children to get the urgent care they require. The newspaper report and photographs raised the awareness of the public to the needs of the migrant children and the advocacy and action of SI Esperance also raised the profile of Soroptimism. 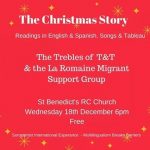 On UN International Migrants Day, SI Esperance in collaboration with The Trebles of T&T, involved the children of the La Romaine Migrant Support Group in ‘The Christmas Story’. The programme consisted of biblical readings in Spanish and English interspersed with performances and community singing of traditional Christmas carols. The migrant children in costume illustrated the story, and formed a tableau of the manger scene. They learned songs in English and were integrated into the community.

About 10 percent of the population of Venezuela has fled their homes to escape political repression, extreme shortages and general economic collapse. Trinidad has received over 40,000 Venezuelans, most in the south. This is a greater percentage per capita of the T&T population than in any other country. The migrants can only get low paid jobs when employed, and are not eligible for state provided education and only emergency medicine.  LARMS is a voluntary organisation based in the local parish church hall which provides instruction and food to children as well as general welfare to the families. The SI Esperance project set out to impact English language teaching, and integration of the children with Trinidadians of similar ages.

One of our members, a retired Spanish teacher, volunteered weekly to teach English to the Venezuelan children. Another member who was the musical director of The Trebles of T&T Youth Choir, incorporated the migrant children into her concert as a manger tableau.  The migrant children learned songs in English, and the choir learned and performed a traditional Spanish song with them. The Spanish children joined in the final rehearsal. The children were measured for costumes. Some were donated by choir members, and some were made to measure from donated and purchased fabric. SI Esperance covered the cost of some of the costumes and the transport for the Spanish students and their families.

The migrant families had suffered extreme hardship before leaving Venezuela. Many arrived illegally at night in tiny craft with almost no possessions. The children’s trauma was compounded by being in a strange country with unknown customs and a language which they could understand or speak.

The families were thrilled that the children had the opportunity to be in the production, being in beautiful costumes, learning songs in English, developing self-discipline, and interacting with English speaking children of their own age. It did much for their self-esteem to be admired and congratulated by the audience, and they felt included and appreciated.

‘We never did something like this at home. It was good.’

‘This was an amazing opportunity for the Venezuelan children.’