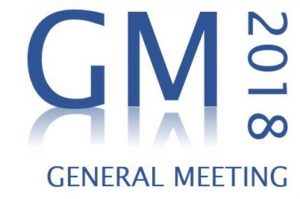 The General Meeting began with the business of adopting the minutes of the last meeting, and there were no amendments. Then the Chairman, SIGBI President Susan Biggs, gave her address, during which she outlined the achievements made by Soroptimist International Great Britian and Ireland (SIGBI) Ltd over the past year, and the work still to be done.

Achievements included SIGBI becoming a charity registered in England and Wales, and the next steps are to register as a charity in Scotland and Northern Ireland, and for Clubs to be registered as charitable entities. There is a lot of work still to be done to achieve this, but Susan emphasised that taking small steps would ensure success rather than trying to do everything at once. President Susan also referred to the website, and said that as a charity SIGBI may be able to apply for a grant to help create a new fit-for-purpose website.

President Susan welcomed four new members of the Board for 2018-2019 and said a fond farewell to five Board members who were leaving the Board after the Conference, although some are going to take up other positions. She also thanked the SIGBI Staff for their contribution over the past year, and paid tribute to Lisa Roscoe, who has left to take up another position, for her work in increasing social media activity within the organisation.

There were four Resolutions, 1 and 2 were carried and 3 and 4 were not carried, although a clause in the SIGBI Byelaws has enabled the Board to override Resolution 4 and it is now carried.