The opening ceremony for the 84th Federation Conference started with a blast of Heather Small’s “Proud”, setting the scene to make over one thousand women think “what have you done to make you feel proud?” As this my first opening ceremony I wasn’t sure what to expect, but as with all things Soroptimist, I wasn’t disappointed.

The Right Worshipful, the Lord Mayor of Liverpool, Councillor Christine Banks welcomed members to Liverpool and explained that she has been an Honorary Member for the last 4 months, having heard of us only 8 months ago, we still have a way to go with promoting ourselves! She encouraged us to explore the local area during our time here, and to use the time to gain inspiration and ideas to continue doing our work in our own towns and cities

Next came the Parade of the flags, 29 country and territory flags that make up our federations were received by President Susan Biggs to the song ”Do you Hear the People Sing”? – this was an amazing sight.

After the Vision and Mission were read, followed by the roll call, which was accompanied by cheering, clapping and flag waving as the regions or countries were announced. President Susan Biggs then declared the conference was open and read out the formal greetings.

The mood then continued with entertainment by Brothers of Swing, the duet arrived on the stage after a slight delay, and soon had all of the audience singing and even dancing in the aisles.  It was lovely to see the lighter side of the Federation Management Board letting down their hair and enjoying the celebrations.

Here to an inspirational conference!

View Photographs from the Opening Ceremony 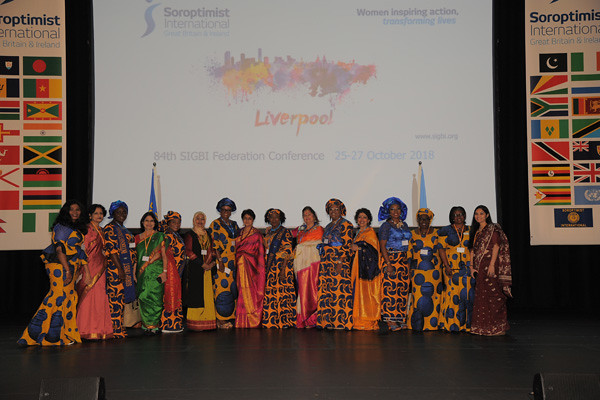