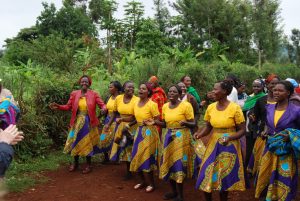 So far Meru Women’s Garden Project is going incredibly well. The 1st year of the programme (Mar 2017 – Feb 2018) was a huge success, the 2nd year is well underway and the great news is that we’re on target to reach more women by the end of the 2nd year than we had originally planned to across the whole three years!

We’ve raised a whopping £127,000 already, so are looking good for hitting our target of £150,000!! The money we’re raising is being spent in roughly £50k tranches for each year. We’re really pleased to say that Child.org and Ciford on the ground have managed to make the money go much further than we hoped and deliver far more than we originally planned.

The main thrust of the work is our agricultural women’s groups. Our initial plan was to reach 360 women over three years. Margaret at Ciford and the Child.org team have made it more efficient and we will reach 410 women by the end of year two and over 600 women by the end of the programme.

The other element of the original proposal was the school gardens. After a lot of time discussing this with the local community, it was clear this wasn’t a feasible element of the project – and wouldn’t be sustainable. So, after much work we’ve rolled out some wonderful alternatives:

A study tour took place in April 2018 where 25 Soroptimists travelled to Kenya to see first-hand the achievements of the project. The women in Meru were welcoming and enthusiastic, and happy to be receiving this support.

We’re so excited about what we’ve already achieved, and are looking forward to continuing to share with you the incredible stories of the women who are taking part in our project.