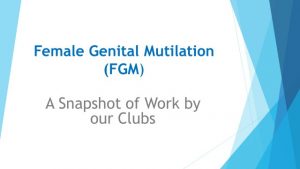 FGM is a violation of the Human Rights of girls and women. It has no health benefits and can cause severe bleeding, severe pain, genital tissue swelling, urinary problems, infections, menstrual problems and complications during childbirth with an increased risk of death of the new born babies. The World Health Organisation estimated in January of this year that 200 million girls and women alive today have been cut in 30 countries in Africa, the Middle East and Asia.

Members of SI Crieff participated in a Cross Party Group on Commercial Sexual Exploitation that meet at the Scottish Parliament:  Soroptimists are stakeholders of this group & issues include FGM which is a priority for Police Scotland.

SI Canterbury joined with other organisations including OXFAM & Amnesty International locally to lobby their MP to mark UN Day for Zero Tolerance of Female Genital Mutilation resulting in a question being put by the MP to the Attorney General who replied describing the steps his department is taking to increase the number of prosecutions. This was an excellent example of the power of using a collaborative approach.

SI Jersey Members were shocked to find that locally there were no laws connected to FGM or Forced Marriage on the Island. In January 2016 the Home Affairs Minister Deputy Kristine Moore spoke to the club, and over the next year they lobbied their local Government for a change in the law.

SI Bootle and SI Kirkintilloch have both provided very practical support by collecting and distributing simple, necessary personal items which we take for granted ~ nice toiletries, nightwear, slippers and new knickers ~ these women have each endured considerable physical and mental abuse, humiliation and degradation so these simple items demonstrate someone cares about them as individuals.

Cricket Without Boundaries is a charity working in Sub Saharan Africa using cricket as a vehicle for delivering health & social messages which includes protection from HIV and the devastating effects of FGM. They work with children including girls coaching them to play cricket and teach adults including women to coach the children. Whilst this practical activity is going on they skilfully weave in lessons about the health & social issues so gradually empowering local communities to change traditional practices. SI St Albans and SI Sutton Coldfield both actively support and promote the work of the organisation

SI Grange-over-Sands and SI Lancaster have for many years been supporting a local midwife who has witnessed the consequences of FGM during her practice in England and regularly travels to  remote rural communities in Kenya where she attempts to alter attitudes to FGM by empowering girls via an education programme, As well as fundraising, both Clubs make Friendship Bracelets for the midwife to present to girls who undergo an Alternative Right of Passage to FGM. Between the Clubs 1460 bracelets have been made during the last year.

One of our Associate Members also choose this area to become involved by raising awareness amongst Teaching Staff in the school where she work as part of the school safe guarding activities. 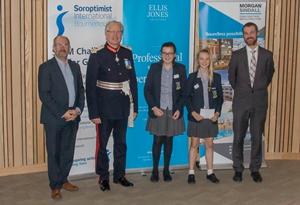 SI Bournemouth wanted to encourage girls to consider studying STEM (Science, Technology, Engineering, Maths) subjects at GCSE level or above and to consider careers in science and engineering. The aim was to reduce the nationally recognised shortage of engineers and scientists in this country and to encourage girls to take up careers in this area.

This was the second year of running this event.

The challenge was to design something that is sustainable for use in poorer countries to improve the lives of those that live there. They had to design, develop, review the project, write a submission and then present to a judge at the heats and finals evening. The project has to meet the national CREST award criteria and they must provide a prototype to discuss with the judges.

Twelve teams from eight local schools took part, and the winners were from Ringwood School,  who researched, developed and designed the concept of a flat packable cot for babies in developing countries. The students received a certificate of participation and achieved the British Science Bronze CREST award, which recognises achievement in STEM based subjects.

All the girls were very enthused and some were keen to study STEM subjects after taking part. Some inspirational speakers were booked for the finals evening, and all the conversations with the girls, parents, friends and guests were very positive.