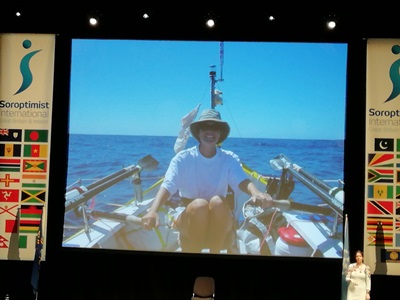 “As long as you can pay, you can go!” That’s how someone who had never rowed before and who’s only (bad) experience up until that moment of being on the sea was the ferry from Dover to Calais ended up rowing across the Atlantic!

Inspirational speaker, author and adventurer, Sally Kettle, is the first woman to have rowed across the Atlantic “the wrong way” (east to west) – twice. This morning, Sally treated us to an hilarious and informative account of her second Atlantic attempt, when she was joined by an unlikely rowing partner, her mother!

The pair completed the 3,000 mile row in 106 days, making it into the record books as the world’s first mother and daughter team to row an ocean.

Sally recounted her adventure with enormous enthusiasm and wit, regaling us with tales of her adventure from the synchronised yoga send-off in the Canaries to the 1am arrival in Barbados almost 4 months later.

Living on board a 23’ by 6’ wooden rowing boat with a cabin the size of a two-man tent wasn’t without its challenges. Initially living off rice cakes and Rice Krispies – “have you tried eating Rice Krispies on a windy day!” and rowing at a gentle 2.5 knots per hour (demonstrated by Sally doing a s-l-o-w march across the stage!), Sally described the amazing star-scape, the diversity of wildlife and the sheer enjoyment of the experience that changed her life forever.

Finally achieving their goal, the pair arrived in Barbados at 1 in the morning only to find they could not be admitted until the passport officials’ office opened the next morning! This didn’t faze the intrepid rower who said, “Having lost 2.5 stone and being brown all over, I really didn’t want to arrive at my destination unseen and in the dark!”

Thank you Sally for an energetic presentation, which whilst it highlighted your incredible resilience and ability to adapt to change, brought us enormous fun and enjoyment.