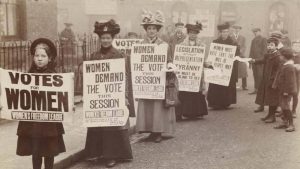 Many Soroptimists have taken part in events to celebrate, including PROCESSIONS, a mass participation artwork to celebrate one hundred years of votes for women.

SI East Grinstead were awarded a grant by the Women’s Vote Centenary Grant Scheme to hold an event on 19 October 2018, involving a story told in words, art and music about Women’s Suffrage. The enabled them to allow free access to the event to anyone interested, and the response was fantastic.