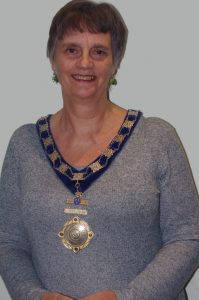 There is no record of who designed & made this; but it must have been made about 1945 when the north, central & south subdivisions of the North West DU were configured.

Two small plates were added above the pendant jewel which completed the change to Cheshire, North Wales & Wirral – this is the same today.

In 1985 the original chain was modified & the whole regalia refurbished. Some of the commemorative bars were removed from the chain & framed as a historic record.  The safety chain was added.

Although there is no record of the original maker, the refurbishment was undertaken by Toye, Kenne & Spencer of Birmingham.  They may well have done the original work.