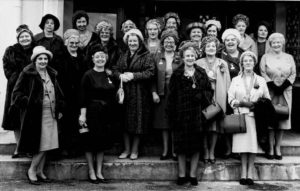 The Anglesey Soroptimist Club was founded in 1964 having 23 members from a miscellany of professions. They were dedicated to the promotion of the Soroptimist ideals.

he first inaugural luncheon was held at the Trearddur Bay Hotel on 13th February 1965 and cost the princely sum of 15shillings per head. This grand occasion saw attendance of many dignitaries, including the Lord Lieutenant Sir Richard Williams Bulkely and his wife Lady Rene Williams Bulkely, Mrs Stallard President of Federation along with the Presidents and partners of the Anglesey Rotary Clubs, The Inner Wheel, the County President of the Women’s Institute, and the President of our mother club SI Bangor. Lady Williams Bulkely was an Honorary member of the club.

By 1984 only 4 of the original founder members remained. Iris Henry who presented the club with our beautiful regalia became an honorary member of SI Anglesey as she had moved to the mainland.

The pendant, which is still used, made from Silveer Guilt with blue enamel was donated by Mrs Henry and designed by Mr Geraint Evans, art teacher at the same school. Mrs Henry was a true Soroptimist, a person of modest dignity, calm, sensible and very aware of the needs of her vocation.

In 1984 there were 39 members of SI Anglesey. Several members had been honoured for their work,. Mrs Gwen Brindle Owen gained an MBE, Mrs Beryl Owen as a JP, Mrs Ann Lloyd Jones was Mayor of Anglesey and Miss Marie Wyn Meredith was a Druid at the national Eisteddfod. Mrs Wyn loved her flowers and for many years presented the incoming President and outgoing President with beautiful displays at the change of insignia. She remained an active member even when her mobility decreased and would always be seen at friendship evenings and other social events.

Over the years club members have come and gone, but many have stayed the course until called above.

The club has supported Local, National and International charities, has forged links with local MP’s and AM’s and throughout have maintained the standards of Soroptimist in all their efforts.