With the easing of lockdown restrictions on the horizon and an efficient vaccination programme we are seeing a light at the end of the tunnel.  We can hopefully look forward to meeting up face to face in the not too distant future.

Whether clubs have been meeting via Zoom or not over the past 12 months they have been involved in an amazing range of projects from making COVID masks, knitting for the elderly, hospital bags for patients, story sacks for schools, continually supporting Women’s Refuge Centres and goodie bags for NHS staff to providing food for the homeless, helping at food banks, delivering necessities to the elderly and families in need….and much more.

Tomorrow Women’s Wirral Centre has continued to provide support and advice for vulnerable women and developed a much needed delivery service.  The two projects developed by a member of SI Ellesmere Port – The Port Grocery and Flynn’s Port in the Storm Crisis Cafe continue to provide a valuable service which was identified early on in the pandemic as featured in the January report.

Clubs are also continuing to raise funds for their chosen charities and Women’s Centres etc.  Whichever way clubs communicate the number of projects delivered and value of your PA work is exceptional. Over the past 3 months 49 programme focus reports have been submitted with funds raised totalling £5,012 and 449 beneficiaries.  UKPAC chair recently stressed the importance of including the number of beneficiaries in PFR’s as it is an essential requirement when submitting reports to the UN.

SIGBI Centenary Year 2021: The Tree Planting Projectis designed to energise Soroptimist across the Federation to ‘Plant Trees for a Brilliant Future’#PlantTrees – As previously reported a number of clubs have already planted trees to celebrate our Centenary Year and others are at the planning stage.  A regional tree planting event is planned to take place in Llandudno and final details will be announced at the Regional Meeting in June.  If clubs are unable to plant trees see information below on how you can still be involved. 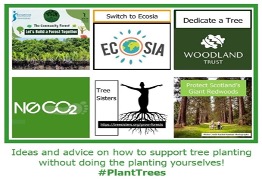