We have now ‘undecked the halls of boughs of holly’ and the decs are back in the loft, much to the amusement of the spiders.  I very much enjoyed the Christmas and New Year frolics, despite having been stricken with some awful virus that has left a legacy of a crippling cough and weariness.  I know many people have had the very same thing.  The result of both the festivities and the virus has made it hard to get back into the swing of ‘work’.  The laptop had a well earned break – but get back to it, we must! 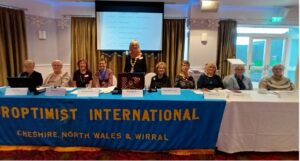 The Change of Insignia at Kinmel Hotel was a fantastic day;  Yvonne was especially keen for it to be ‘done properly’, unlike the non-event in Belfast.  And she did make it very special for herself, me and Janet Murfin, incoming PE.

Yvonne’s outgoing speech was touching and heartfelt and she deserved the standing ovation.  Officer’s, mostly carrying forward from previous years, were introduced and sat behind the recently found table cloth for Region.  All the Clubs had stalls and raised money for their Club charities – I sensed that this was much appreciated, especially when Yvonne left plenty of time for shopping. 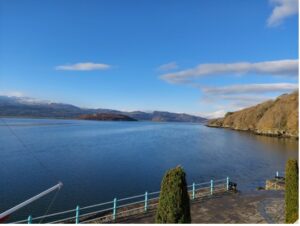 Travelling into the beautiful countryside of scenic Wales is usually a treat; not so when faced with snowfall, freezing fog and a contrary SatNav.

SI South Caernafonshire hosted their Christmas celebrations with the traditional carol service in Cricceith.  I had never attended this event before but had heard it was legendary – and I could quite see how that reputation was earned.  Half the service and singing was in Welsh and fortunately (for the congregation) I was handed a reading in English!  The service got us all in the mood for the incredible lunch at Portmeirion Hotel.  Despite the harsh weather on the journey, upon arrival we were greeted with a beautiful sunny, but cold, vista of the mountains coated in pure white snow.  Looking across the glistening water of the bay made my heart sing.  What a great day was had by all.

Another visit into Wales was to sit in on a Club meeting with SI Anglesey.  I was made to feel so welcome and learned 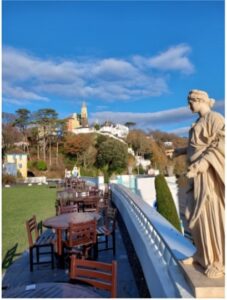 a lot about the generous acts undertaken by the members.  The warmth of the ladies was quite overwhelming and I was so impressed by their Club.  They also showed their abilities as ‘nurses’ when I went flat on my face, wrist and knee when misjudging the curb of a ramp!  Much mopping of blood and copious cups of tea soon cured me, but not my embarrassment!

I am looking forward to the year ahead, starting with a face to face Officers and Reps meeting in Llandudno on Saturday 21 January, followed by the first Region meeting on Zoom on Saturday 18 February 2023.  Can I remind you that there is a New Member’s lunch planned for Sunday 26 March 2023 for new members and their mentors?

Finally, may I wish you and your families a very Happy New Year.  2023 will be a year for ‘New Chapters Generate New Stories’ and I remain hopeful for invitations to your clubs to hear these New Chapters.