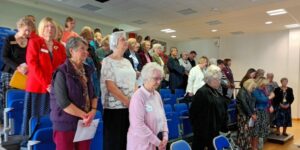 President Yvonne welcomed members and the meeting began with a 2 minute silence as a mark of respect to our late Queen Elizabeth 11.

Members were advised that the SIGBI Federation Conference will be held in London in October 2023 this being in addition to the Soroptimist International Convention which is being held in Dublin in July 2023 with the theme ‘Challenge the Future’. 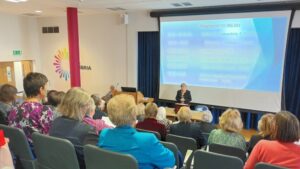 An update on E Clubs was given by Regional Membership Officer Penny Clarke who advised that a pilot scheme SI Libertas had attracted 18 members and that they were meeting virtually 3 times a month and becoming involved in Women’s Refuge centres and Domestic Violence etc with Programme Action being the main driver, The Charter Ceremony of SI Libertas will be held by Zoom on 22nd September 2022.  A Virtual Club is aimed at complementing not replacing existing clubs.  Penny advised that the next step for our region is to set up a membership and development working party.

President Elect Susan reminded members about the Christmas visit to Chatsworth House and stressed the need for members to complete the forms asap confirming their attendance in order that details can be finalised e.g. pick-up points, timings etc.  The decorations in the house will most certainly have the wow factor plus a super Christmas market.

Following on from its success this year a ‘New Member’s’ lunch to also include sponsors has been booked at Faenol Fawr Hotel, Bodelwyddan on Sunday 26th March 2023.

Programme Action Officer Gillie O’Rourke was congratulated on being appointed Chair of UKPAC and she advised that due to her recent appointment she was standing down as Regional Vice President.

The following officers were reappointed: 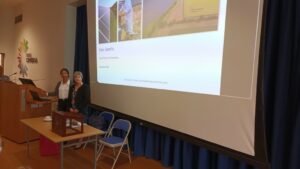 Continuing the Presidents theme of Climate Change the guest speaker Ypatia Michou Archimandritou of Greencoat Capital gave an interesting presentation on the benefits of Solar Power.  Greencoat Capital is the largest investor in renewable energy in the UK focusing on solar, wind and bioenergy.  The multi billion-pound company is also active in Europe and the USA. Ypatia spoke about solar as being clean, cheap, easy to install and maintain, local job creation, versatility e.g. off grid small project and ticks a number of the SDG’s boxes such as educations, farming and entrepreneurship!  The statement that only poor-quality agricultural land was used for solar panels was questioned and contradicted by members who spoke from personal experience as was the statement about creating ‘local’ jobs.

The environmental benefits such as noise pollution, air pollution, minimal material and water waste were highlighted as well as the biodiversity 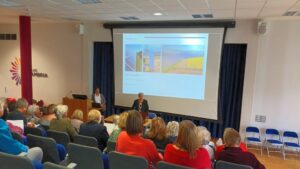 including grazing, tree planting, apiaries, nesting etc.  Ypatia ended her presentation by leaving us with the thoughts of scientific developments which could include solar windows etc.

The Members then went into Breakout sessions to discuss the Region Handbook, and President Elect Susan brought the meeting to a close

The next Region Meeting will be on 19th November 2022 at The Kinmel Hotel, Abergele