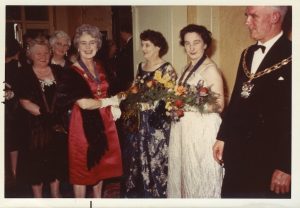 The inaugural meeting had been held on 26th June 1962.

The Federation Conference was held in Llandudno in 1975 and members gave a wonderful Wales welcome to all the delegates, see below a report taken from the local Newspaper 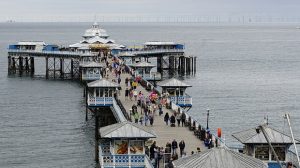 From Thursday until Sunday Llandudno became the focal point for more than 1500 women attending the 41stAnnual Confrence of Soroptimist International Great Britain & Ireland.

The delegates who included representatives from Australia, New Zealand, Sri Lanka, Canada and the United States arrived in the town and started with a pre-conference coffee party at the Grand Hotel.

Business commenced on the Friday afternoon when the conference was officially opened by the Federation President Dr Hilda Ruth Harris, Llangollen, a member of Wrexham Club and a consultant pathologist.

During the next two days delegates passed resolutionson the controversial legislation on rape,in which they asked the Government to afford victims of rape the same anonymity as is afforded to victims of blackmail

During their stay in Llandudno delegates were entertained with a variety concert on the Friday and a Male Vioce Choir and traditional Welsh folk dancing on Saturday, both at the Pier Pavillion.