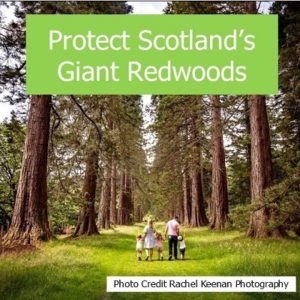 Described as one of the finest entrances to a botanical garden anywhere in the world, the magnificent Redwood Avenue at Benmore Botanic Garden, on Scotland’s west coast, is in desperate need of innovative actions or risks being lost to the nation through climate change and disease.

Planted in 1863 by the wealthy American James Piers Patrick, it lined the original driveway to Benmore House. These trees (Sequioadendron giganteum), native to California, were among the earliest to reach British shores when the species had only just been introduced to the outside world, making Benmore’s redwoods some of Europe’s oldest and tallest, reaching up more than 50m high.

Today, the spectre of climate change hangs over the trees and its effects are already marked. Benmore Curator Peter Baxter, said: “The trees are now existing, rather than growing. Their crowns are thinning and many lower branches are completely defoliated.

Your support will allow Benmore to carry out much-needed work to save these historic trees for future generations.