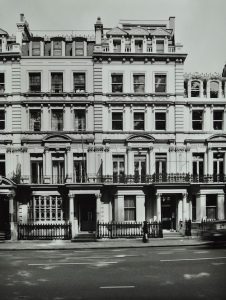 The Greater London Club was formed in 1924 and was the first Soroptimist club to be chartered in Great Britain. Founder President Kathleen, Viscountess Falmouth was presented the Charter with a club of 100 members,

In the words of Kathleen, Viscountess Falmouth:

“I must say that after the dreadful war, the idea of a Women’s group dedicated to service and offering friendship with an international scope was very appealing.

I met Mr Stuart Morrow who told me about the Oakland California Club and it wasn’t long before I was able to persuade a number of very influential women to join. We had a great variety of Classifications – an architect , a financier on the London Stock Exchange, a dental  surgeon, owner of a toy manufacturing Business and a house decorator: I  looked for women who were not only outstanding in their professions, but who were champions of women’s rights too.

We had engineers and doctors, hoteliers and a film maker, as well as the executive secretary of George Bernard Shaw. We met every Thursday for a luncheon meeting and one of  our first projects was forming a Loan Training Fund to help young women in a variety of vocations.

We always began and ended our meetings on time – and I heard that Violet Richardson Ward was also a stickler  for promptness. The other thing we felt to be important was publicity:

We invited outstanding people as speakers, people whom we knew would command attention in the press, and so Soroptimists benefited. It helped in our being able to charter seven more Soroptimist Clubs in 1929”.

This item above taken from “Soroptimist Heritage” A play written in 1982 using recorded words of the characters.

One member stands out for special mention – Elizabeth Hawes.

Elizabeth’s contribution to Soroptimists is unsurpassed – twice President of the Greater London Club and President of the Federation of Great Britain 1937-1938 and the first International liaison Secretary to the Soroptimist International Association 1938 – 1948 In the words of Margaret Sampson writing for the Soroptimist magazine in 1973 “The work she did during those 10 arduous years to cement the bonds of Soroptimist International throughout the world and particularly in keeping hope alight in the suppressed Clubs of the European continent, is a lasting monument to her memory” For more information about Elizabeth and her work click here

Extension work began and in 1926 the Manchester club was formed with a membership of 62 members. Later in the same year the Liverpool Club was formed and chartered in 1927. The Glasgow and Edinburgh Clubs were formed in 1927. the founder President of the Glasgow Club was Miss Helen Catto who became President of the National Union of Great Britain and Ireland in 1932-1933

Three members from each of these five Clubs – London, Manchester, Liverpool, Glasgow and Edinburgh were elected as the British Council of Soroptimist clubs dealing with national policy, and given the remit for more extension work.

The Birmingham Club was the first club authorized by the National Council and was formed in 1928. It was in this same year 1928 that clubs in the United States and Canada formed the American Federation, and Clubs already established in Britain, France, Holland and Italy met in London and formed the European Federation.