“Memories of Violet Richardson – Ward”, written by her daughter in law Mimi Ward in 2019

Violet’s lifetime motto was “It’s what you do that counts” read the story of how it began: 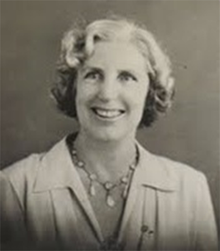 When Violet was a young teen she was tall, lanky and athletic, always dressed in comfortable and modest clothes and was not at all like the standard for “feminine beauty” of that time. She told me that this was never an impediment and that she had friends growing up, and I believe that is in large part because she never seemed to care about appearance but rather a person’s character.

While the family was living in New Jersey, she took her volley ball to the beach to see if she could get a game going with some of the other girls on the beach. She was not well received by the other girls, who made fun of her and told her to “take your silly ball and go back home”. This rejection was very painful as you can imagine and she started back home in tears. On the way, she met her older brother, Stanley, who was walking toward the beach. He immediately put his arms around her and said, “Kid, why are you crying? (He always called her “Kid” – it was his special nickname for her.)

She began, “Those girls on the beach wouldn’t play volley ball, and they were mean to me and made fun of me…” Stanley interrupted, “But Kid, why are you crying?”

She replied “I just told you, those girls wouldn’t play with me and hurt my feelings…” Again Stanley interrupted her, “But Kid, Why are YOU crying? You didn’t do anything wrong. It’s those other girls who did something wrong and they’re the ones who should be crying, not you. It’s what you do that counts!”

Comforted by her brother’s words, she went home and wrote about it in her diary. And from that day forward, it became her motto, “It’s what you do that counts.”

I first heard her say this when she comforted one of her grandchildren with these same words and that’s when I asked her about the origin, since it was so wise a saying. That’s when she told me this story. I was especially interested because it can be said several different ways, with several shades of meaning.

As you may know, her son, John Richardson Ward and I married in 1970, when each of us had custody of our four children from a previous marriage, making a blended family of eight, six sons and two daughters! Violet was pleased to accept my children as her own grandchildren, with lots of hugs, Christmas and birthday presents and proud introductions to her friends as HER grandchildren and even making sure they had “pocket money” which is what she called the dollar bill she would often give to each one occasionally. She is lovingly remembered by all her grandchildren.

One side story that I find interesting; Violet’s first great grandchild Carolyn, who was born in 1980, now has two daughters of her own, Violet Grace Fischer and Lily Ann Fischer. I once asked Carolyn if she had named Lily Ann after one of Violet’s longest and dearest friends, Lillian Fisher, and she was astonished at the coincidence, as was I.

Arthur Stanley Ward, Violet’s eldest grandson, still lives in the house in Kensington, CA, where Violet and her siblings lived after moving to California and “Friend Husband”, Stanley Arthur Ward and Violet raised their son, John.

That’s all for now. I so appreciate your interest in Violet, who was an inspiration to me, as I am sure she has been to many others. I am happy to add these stories to her legacy.”

Back to Soroptimist History page