By 1938 expansion of the Soroptimist organization was now taking place at a rapid rate and by the time members met in the summer of 1938 at the International Convention in Atlantic City, New Jersey, the records state that there were 11,289 members in 191 clubs in 13 countries. 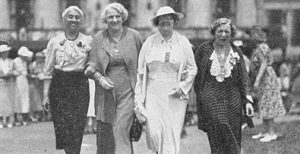 Among those attending the Convention of Soroptimist International Association (the title at that time) were representatives of 90 clubs from the Americas, 40 clubs from the Great Britain & Ireland Federation and 10 from the European Federation. This was the largest Soroptimist gathering to date despite the fact that tension was now mounting in Europe. In fact, the Atlantic City Convention in 1938 would be the last International Convention until 1948 after World War II.

As the business commenced it was clear that improved channels of communication were necessary. This was despite the fact that since 1930 both the American and British Federations were producing their own magazines. A more important step was taken to draw the Federations together. The Constitution was amended to provide for an International Liaison Secretary. The person appointed to this important post was Elizabeth Hawes, then President of the Federation of Great Britain and Ireland. With a charm and ability to say the right thing at the right time, Elizabeth Hawes built avenues of friendship that were to be most valuable in the years ahead – To read about Elizabeth Hawes click here 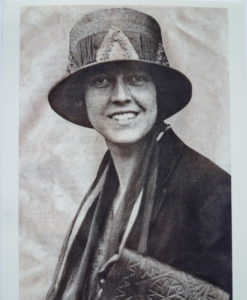 The Atlantic City Convention agreed that efforts be made to encourage women to enter public life. Although both American and British women had received suffrage simultaneously, British women had played a more active role in local as well as national politics. Participation in politics varied among the European countries. While Scandinavian women continued to participate, Nazism and Fascism excluded women and some clubs dissolved even before World War II.

One of the British women attending was Miss Edith Base from Soroptimist club Newcastle upon Tyne In  June 1938, Miss Base represented Newcastle at the 1st International Soroptimist Convention in Atlanta City, USA.

World peace must have occupied the minds of many members at this Convention. In her report, Elizabeth Hawes presented a resolution which received the unanimous approval of all delegates:

This was the first of many future Policy Statements.

The social activities of any international gathering do so much to create an atmosphere of goodwill. The Atlantic City Convention was no exception with members meeting on so many social occasions giving the opportunity for a free exchange of views away from the formalities of the discussion.

As we look back, knowing that war came only a year after the Atlantic City Convention in 1938, it is perhaps poignant to recall an extract from the Christian Science Monitor reporting on the events: “The Soroptimist International Association closes its Convention in Atlantic City and women business executives of Europe and America prepare to leave the seaside resort to preach a ‘league of women for peace.’ We don’t know just how to define a Soroptimist but we recognize common sense when we see it.”

From “The History of Soroptimist International” by Janet Haywood